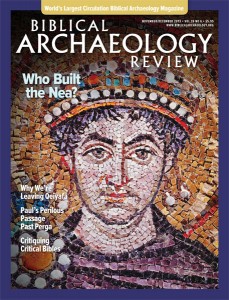 Running through the middle of Jerusalem is the columned Cardo, the major street of the city, on which the church fronts. The Cardo (actually the western Cardo; the city has two main north-south streetsa) begins at the still-existing Damascus Gate and extends from north to south. The Damascus Gate with its two towers (on the left end of the map) opens onto a plaza 032 with a column in the center. The Cardo branches off from this plaza.

At the far end of the Cardo is another major church, marked, as are all churches on the map, by a red roof. This one, however, is unusual for its size.

It is clear that by the Byzantine period, the time of the Madaba map, the Cardo was there. But what about earlier? It sure does look like a Roman street.