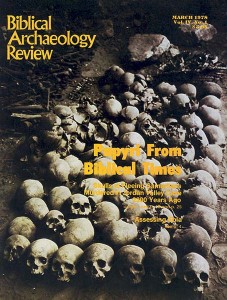 How quickly should ancient texts be published after they come into a scholar’s hands?

Within one year—at most, says Professor David Noel Freedman in a forthcoming issue of the Biblical Archaeologist.

This is a statement of major importance by one of the world’s leading Biblical scholars—a statement to which the Biblical Archaeology Review is pleased to give its enthusiastic endorsement.

Professor Freedman’s proposal calls for a drastic change in the present procedure whereby a scholar may take ten or twenty or more years to complete his own study of a manuscript before making the original text available to other scholars. For example, the materials from Cave 4 of the Dead Sea Scroll archive are still not available to scholars generally—after 25 years.

As Professor Freedman points out, “Cave 4 contained more material—all in fragmentary condition—than any other cave; while the task of sorting and piecing together, studying and interpreting was doubtless the most difficult of all, still after 25 years (the materials from Cave 4 came to light in 1952) we would expect that the materials would be available for study.”