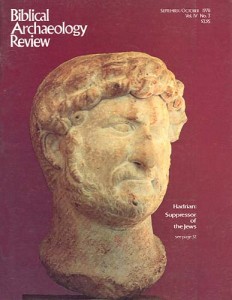 At a site called Izbet Sartah, now believed by some scholars, to be Biblical Ebenezer, a recent excavation by Tel Aviv and Bar-Ilan Universities has uncovered a small clay potsherd—unrelated to the Biblical story—which, however, is the most important single find of the excavation. The sherd contains the longest proto-Canaanite inscription ever discovered.a

The unimpressive looking sherd measures only 3 ½ by 6 inches, but it contains a dramatic addition to the study of ancient Hebrew epigraphy and to the early history of the alphabet.

Inscribed on the sherd are five lines of letters. Most of the letters on the first four lines have been identified, but make no sense as words. We suspect that they are random exercises in writing letters by a student scribe.

The fifth line is, with minor deviations, the Hebrew alphabet, consisting of 22 letters! Unlike modern Hebrew, which is written from right to left, this alphabet was written from left to right (like English). At the time it was written, the writing direction had not yet been fixed.

Two kinds of evidence ordinarily enable scholars to date ancient writings, and both are involved in dating the Izbet Sartah sherd: first, the archaeological evidence; that is, what is the date of the archaeological stratum in which the inscription was found? Second, the evidence of the letters themselves—their shape, direction and form. The first type of evidence entails a stratigraphic analysis; the second, a palaeographic analysis.