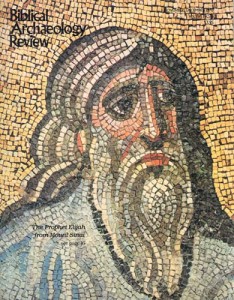 I am happy to report to BAR readers on the preservation and restoration work which was accomplished last year with funds which they—you—provided.

But before I do let me tell you briefly about the continuing excavations at the site of the winter palaces.

Our work at Herodian Jericho began in 1973 and we have been excavating for six years. As a result of these excavations, Herodian Jericho has become one of the key archaeological sites in the country relating to the period between approximately 100 B.C. and 100 A.D.

BAR readers already know of this work from the vivid article which appeared in the June 1977 BAR (“The Winter Palaces of Jericho,” BAR 03:02) by BAR Assistant Editor, Suzanne Singer. (I wrote an even more recent, although technical, report on these excavations which appeared in the December 1977 issue of the Bulletin of the American Schools of Oriental Research, No. 228).

The results of last season’s work, which have not yet been publicly reported anywhere, contributed substantially to our understanding of the Hasmonean palace complex.

In a cistern, we found several columns with architraves which originally belonged to the building south of the swimming pool. (See “The Winter Palaces of Jericho,” BAR 03:02, especially the reconstruction drawing). These architectural elements apparently fell into the cistern when the building was destroyed. Previously we had found only the building’s foundation. These new elements enable us to reconstruct quite precisely the facade as well as the plan of this important building.

East of the Hasmonean palace buildings we opened up a new area which, surprisingly enough, appears to have been an ancient industrial zone. Only continued excavation of this new and complicated area will more certainly disclose its character and function.

The complex of winter palaces from the Hasmonean and Herodian periods in its dramatic setting on the desolate shore of the Wadi Kelt should be turned into a national park. Eventually, the lush formal gardens which existed in the midst of this parched wilderness during the Herodian period, should be restored.

Meanwhile, we must do what we can. The preservation and restoration work which we undertook this past year with the generous help of BAR readers was the first stage. I am pleased to report that the site’s potential for future development as an archaeological park has been preserved.

Our first object of attention was the Hasmonean swimming pool—probably the same pool in which the High Priest, Aristobulus III, was murdered in 36 B.C., as reported by the first century historian Josephus (see “The Winter Palaces of Jericho,” BAR 03:02). Prior to our preservation work, the walls of the pool, especially on the western side, threatened to collapse. When the pool was originally built the walls were faced with courses of unworked stones over a core of similar smaller stones, all strengthened with lime mortar. With the years, most of the facing stones loosened, and only the lower courses of the facing stones remained intact. The core of the wall, on the other hand, proved to be much stronger. As part of our BAR-financed preservation work, we reinforced these lower courses of facing stones and also restored some of them, in order to delineate better the lines 012and features of the pool. This was especially important on the ‘bridge’ which divides the pool into two parts. The core of the walls was still so strong that we needed to do nothing to it except repair a few gaps (which we filled with gravel stones embedded in cement) in order to avoid any danger of future collapse. (See “before” and “after” illustrations.)

We also did substantial preservation work on the ritual baths west of the Hasmonean swimming pool. Here we reinforced existing walls, especially the upper courses, which had been exposed to the rare but torrential winter rains and the ever increasing number of visitors’ feet. We also restored some of the many delicate water channels and irrigation installations where the ancient 013plaster is generally well preserved.

This work not only preserved the bath complex but also helps the student and visitor to more easily understand this complex and how it originally functioned.

Needless to say, all the restoration work, including restoration of wall sections and water channels which had been totally destroyed, was done in a thoroughly scientific and authentic manner based on information revealed by the excavations.

The consolidation of the walls was accomplished by using stones similar to the original ones. The restored stones are held together with cement mortar. In several sections, as an experiment, we even used clay mortar similar to that used by the original builders.

Although the original walls had been covered with an outside layer of plaster, we did not add this layer in our preservation work. I intend to discuss the reason for this and other principles of archaeological preservation and restoration in a BAR-sponsored study which will be completed shortly and published in a scientific journal.

The last element we worked on was the “opus reticulatum” walls in the northern wing of the later Herodian palace. These walls, so popular in Italy, are extremely rare in the eastern Mediterranean. Indeed, they are known here only in two other places, both in Palestine—one at Banias Philipis and the other in a structure in Jerusalem. Both of these other opus reticulatum walls were probably built by the same Roman crew that worked at Jericho.

The problem with these opus reticulatum walls at Jericho was similar to the problem with the swimming pool walls we had treated earlier; the core of the wall was much better preserved than its facing of small opus reticulatum and opus quadratum stones. Many of these delicate stones had fallen off and were found in the debris beside the walls. To preserve these rare examples of so-called Roman cement, we consolidated and reinforced the intact facing stones and rebuilt other sections over the intact core, where the facing stones had fallen off. We did this all over the northern wing of the palace but paid special attention to the frigidarium (see “before” and “after” photographs).

We were fortunate to have working with us Abu Zaudi, a man in his sixties who lives in Jericho. Abu Zaudi had previously worked with us during the excavation season. Based on his talent at digging, we assumed he would do as well in restoration work. Our intuition proved correct, and Abu Zaudi did his opus reticulatum rebuilding excellently. The other members of our team were an experienced young Israeli and several Bedouins.

Only the first step of preservation and restoration has been completed at Herodian Jericho. This winter we hope to continue our work along with the continuation of our excavations. Perhaps we will be able to raise one of the columns we excavated last season and restore and protect the remains of a yellow, red, and black wall fresco.

Let me conclude with heartfelt thanks to BAR readers for your contributions to this work, and with an invitation to come visit us to see on the spot what has been done with your help.

Ehud Netzer (d. 2010) was a Professor Emeritus at the Hebrew University’s Institute of Archaeology. An authority on the architecture of Herod the Great, he excavated at sites throughout Israel and Jordan—including Jericho, Herodium and Masada, where he worked with the late Yigael Yadin. Netzer died on October 27, 2010 from a fall at Herodium where he had been digging for 38 years in search of Herod’s tomb.