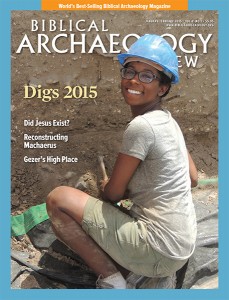 The High Place consists of ten monumental standing stones, some more than 10 feet tall, and a puzzling squarish basin about 6 by 5 feet with a rectangular impression in the bottom.

The Gezer High Place was originally excavated by Irish archaeologist R.A.S. Macalister between 1902 and 1907.

But, alas, he did more damage to the site than good. As Dever describes Macalister’s analysis, “There is little reason to probe further through Macalister’s tortuous discussion of his excavation of the ‘High Place.’ It is impossible to glean any significant information from the mixture of fact (?) and fancy.”

In supposed association with the standing stones, however, Macalister also discovered several burial jars containing the bones of infants. Macalister estimated the infants were less than one week old. Some of the infants’ bodies had been burned. On this basis, Macalister interpreted the area of the High Place as a site for infant sacrifice.