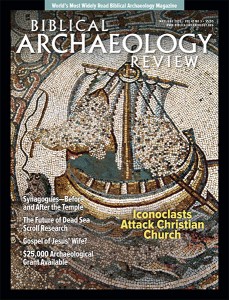 Although he is not an archaeologist, Canadian/Israeli TV journalist and producer Simcha Jacobovici (pronounced Yacobovitch) has made some remarkable archaeological discoveries.

For example, the first plague: When pharaoh refused to let the people go, Moses held out his rod, and the waters of Egypt, including the Nile and even the waters in vessels, turned into blood (Exodus 17:14–21). Simcha discovered how it was done: Earthquakes triggered gas leaks that did it; Simcha found a lake that turned reddish brown from such a gas leak.

Before the Israelites left Egypt, they “borrowed” silver and gold from the Egyptians and then took it with them (Exodus 11:2–3; 12:35–36). Simcha has found some of this—in Greece. As Simcha discovered, some of the Israelite slaves did not go to the Promised Land but boarded ships and sailed to Greece. There some of the gold that the Israelites brought with them from Egypt turned up in the tombs of Mycenae.

And this is only the beginning. Simcha’s discoveries relating to Jesus and early Christianity are breathtaking. Let’s begin with the nails that were used in Jesus’ crucifixion; he found them in the lab of an Israeli academic at Tel Aviv University.

Simcha has also discovered the true tomb of Jesus and much of his family.