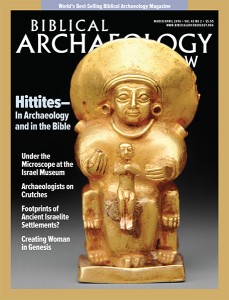 For the first time, the royal seal of King Hezekiah of Judah has been found in an archaeological excavation. The stamped clay seal, also known as a bulla, was discovered in the Ophel excavations led by Dr. Eilat Mazar at the foot of the southern wall of the Temple Mount in Jerusalem. The bulla, which measures just more than a centimeter in diameter, bears a seal impression depicting a two-winged sun disk flanked by ankh symbols and containing a Hebrew inscription that reads, “Belonging to Hezekiah, (son of) Ahaz, king of Judah.”

The renewed excavation of the Ophel, the area between the City of David and the Temple Mount, occurred between 2009 and 2013. This bulla was discovered along with 33 other stamped bullae during wet-sifting of dirt from a refuse dump located next to a 10th-century B.C.E. royal building in the Ophel.

In the ancient Near East, clay bullae were used to secure the strings tied around rolled-up documents. Bullae were made by pressing a seal onto a wet lump of clay. A stamped bulla served as both a signature and as a means of ensuring the authenticity of the documents.

Hezekiah, son and successor of Ahaz and the 13th king of Judah (reigning c. 715–686 B.C.E.), was known for his religious reforms and his defiance of Assyrian rule. He famously fortified Jerusalem against the pending attack of the Assyrian emperor Sennacherib.