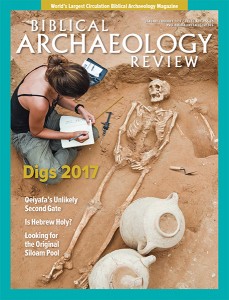 This article was initially rejected by BAR editor Hershel Shanks. The original manuscript recounted a walk three of us took outside the circular wall that encloses Khirbet Qeiyafa. On the walk were the senior author of the article (Yosef Garfinkel, the director of the excavation of Khirbet Qeiyafa); his codirector (Saar Ganor of the Israel Antiquities Authority); and the junior author of the article (Joseph Baruch Silver, a supporter of the excavation). According to the original submission, Joey (as he is known) “suddenly noticed in the southern part of the wall massive stones that stopped in a clear vertical edge, indicating an opening in the wall that had been blocked off with relatively small stones. ‘Another city gate!’ Joey yelled.”

In his letter of rejection, Hershel addressed the senior author: “Dear Yossi: I have your manuscript on the two gates at Qeiyafa … It looks like you are making Joey a coauthor as an expression of gratitude for his financial support of the excavation. We cannot get into that. Besides, it is just unbelievable that Joey would have noticed a gate in the wall that you and Saar failed to notice after you two had walked outside the walls of the site at least a million times. Even if it is true, we can’t publish something like that.”

“Dear Hershel,” I (Yossi) replied. “To notice a blocked gate is not so easy. It is a matter of how you look, where you stand, the light, the vegetation and so on. The fact is that Joey was the first to notice the second gate of Qeiyafa. He made a great contribution in this respect.”

Our (Yossi’s and Saar’s) first reaction to Joey’s identification of a “gate” was to dismiss it as an “amateur” discovery: It couldn’t be. We had already excavated a major city gate on the western side of the circular wall. Could there be another gate on the southern side of the wall? No city of this period in Israel had more than one gate.

A test excavation, however, confirmed that Joey’s identification was indeed correct. It was a city gate—a second one. And it turned out that this was the038 key to identifying the ancient name of the site: Qeiyafa was Biblical Sha’arayim, Hebrew for “two gates” (Joshua 15:36; 1 Samuel 17:52; 1 Chronicles 4:31).

Qeiyafa lies about 20 miles southwest of Jerusalem, on the summit of a hill on the northern border of the Elah Valley. This is a strategic location—on the main road from Philistia and the coastal plain to the hill country of Judah. Our excavation uncovered a city dated radiometrically (by carbon-14 tests on 27 olive pits) to Iron IIA (c. 1000 B.C.E.), the time of King David.1

Qeiyafa has been a thorn in the side of those scholars who claim that there are no historical memories in the Hebrew Bible from the 10th century040 B.C.E. Some time ago, for example, Yehuda Dagan of the Israel Antiquities Authority claimed that the entire Iron Age city, with its gates, casemate city wall and buildings, was built in the Late Persian/Early Hellenistic period, based on pottery sherds collected on the site’s surface some 20 years earlier.

In an article subtitled “An Unsensational Archaeological and Historical Interpretation,” Tel Aviv University archaeologists Israel Finkelstein and Alexander Fantalkin claimed that, although the city and the casemate city wall are from the Iron Age, the two gates, as they are seen today, are not.2

We will discuss the two gates and show that they were, indeed, an integral part of the city built in the time of King David.

The earlier discovered gate—in our Area B—on the western side of the city lies at the end of a road leading from the coastal plain. It is 35 feet wide on the outside and 42 feet deep into the city. The gate façade is recessed into the city wall by approximately041 1.5 feet from the line of the wall. This would make it easier to defend the wooden doors of the gate, the weakest points in the city’s fortifications. The gate has four inner chambers, two on each side. A drainage channel covered with flat stone slabs that are still in their original location was found on the left-hand side when entering the city.

The threshold of the gate consists of a huge single stone, 10 feet long and weighing roughly 8 tons. This massive monolith is quite unusual. A threshold of similar length and width at nearby Lachish was built from three individual stones, rather than one, as at Qeiyafa.

The southern gate—which Joey found in our Area C—lies at the end of a road leading from the Elah Valley on the south to Qeiyafa. (This gate is similar in plan and dimensions to the western gate.) An unhewn standing stone (massebah) or sacred pillara almost 3 feet high was found in the southwest chamber of this gate.

The façade of the southern gate is even more monumental than that of the western gate. It includes two enormous stones, one on each side. Indeed, this is the most monumental gate façade yet excavated at any Iron Age city in Israel. And the use of a single huge stone followed not only from engineering considerations related to the strength of the construction, but also served as propaganda to convey a political message. The monumental stones at the sides of the southern gate at Khirbet Qeiyafa demonstrated the power of its ruler to all who entered the city.

At the summit of the site, we found a palatial structure that probably served as the central administrative building for this area of the Davidic kingdom. This, along with the rest of the site, disproves the early assumption by some scholars that David was simply a local chieftain who ruled the area around Jerusalem at most.b Excavation showed that more than 200,000 tons of stone was required to construct this administrative center.

Some scholars view King David’s kingdom as a simple agrarian society, sparsely inhabited, with no fortified cities, no administration and no writing. These scholars find it very hard to accept the new discoveries at Qeiyafa, which have completely dismantled these hypotheses.

Of course, our prize find at Qeiyafa was a five-line inscription inked on a broken piece of pottery (an ostracon). While scholars have proposed several different decipherments of the text, it is clear that this is not simply a commercial text; it is a literary text, reflecting ethical principles, and was penned by a professional scribe.c It also clearly includes the word melekh (king). According to the Hebrew University of Jerusalem epigrapher Haggai Misgav, this is the oldest Hebrew inscription ever discovered.

As new discoveries emerged from the ground at Qeiyafa, scholars have had to change their conclusions. For instance, the eminent Tel Aviv University Biblical historian Nadav Na’aman once suggested that Qeiyafa was a Philistine site and that it was the Biblical site of Gov. Four years later he rejected his own proposal and now claims that Qeiyafa was a Canaanite site whose name could not be identified.3 He even claimed that a site with one gate could be called Biblical Sha’arayim.

Since the discovery of the second gate at Qeiyafa, Israel Finkelstein and Alexander Fantalkin in their previously cited article raise other questions. The western gate, they argue, is a post-Iron Age construction: “The western gate as seen today at Khirbet Qeiyafa represents, in the main, a post-Iron Age occupation of the site.”4 They make an interesting argument about the gate’s nearly 10-feet-long, 8-ton threshold stone: “The original, monolithic threshold … seems to be dislocated, as it would make the doors close on the outer side of the outer piers—which would render the gate vulnerable … The practice with Iron Age gates was to close the gate on the inner side of the outer piers … Therefore, the threshold may be a reused one, not in its original location.”5 It is not in its original location, they say. It has been moved; in its present location, the doors would close on the outer side of the gate, making it vulnerable to attack.

At the nearby site of Lachish, however, the threshold of the gate is located exactly in the same location as at Qeiyafa. Apparently the people of ancient Judah organized the city-gate threshold in this specific style.6

The two gates at Khirbet Qeiyafa are an integral part of the site’s Iron Age fortification. The western gate opens onto the road going west toward Philistia; the southern gate opens onto the road descending directly to the Elah Valley and thence toward Jerusalem. They are identical to one another. Each has a drainage channel in the gate passage, on the left side as one enters the city.7

Inside each gate was a piazza (or plaza). Here no houses abutted the city’s casemate enclosure wall as are found beyond the piazza area.

Another unique feature at Qeiyafa: Adjacent to each piazza was a cultic room. Each of these cultic rooms was part of a house next to the gate, but in each case the cultic room bordered the piazza.

In the ancient world, the people did not enter temples. They gathered outside the temple in an open area where a variety of public cultic activities would take place, such as the sacrifice of animals, worship or religiously inspired dancing. The gate piazzas at Qeiyafa apparently served in this way, particularly during holidays, when people living in nearby villages would make pilgrimages to the site.

We have already shared with BAR readers a small stone model shrine from one of the cultic rooms.d Other exciting cultic paraphernalia include a pottery model shrine, a basalt altar and fragments of a cult stand.

There can be no doubt, however, that Qeiyafa was built according to a single well-designed urban plan. Before the first stone was put in place, it was already clear how the city’s fortifications would look with its two gates. No doubt for this reason—because of its unique two-gated city wall—it was called Sha’arayim—“two gates,” as referred to in the Bible.

Yosef Garfinkel is the Yigael Yadin Chair in Archaeology of Israel at the Hebrew University of Jerusalem. He directs excavations at Tel Lachish and Khirbet al-Ra‘i—in addition to publishing the Khirbet Qeiyafa excavations.

Saar Ganor is an archaeologist with the Israel Antiquities Authority and a lecturer at the Hebrew University of Jerusalem. He codirected the excavations at Khirbet Qeiyafa.

Joseph Baruch Silver, an immigrant to Israel from Canada, served in the Israel Defense Forces and studied toward a B.A. at the Hebrew University of Jerusalem. He is a licensed tour guide.