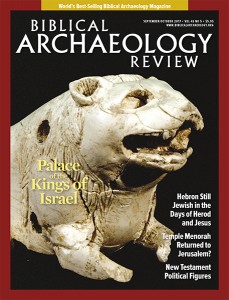 On July 10, 2016, the Israel Museum awarded the Percia Schimmel Award for Distinguished Contribution to Archaeology in Eretz Israel and the Lands of the Bible to Lawrence E. Stager, the Dorot Professor of the Archaeology of Israel, emeritus, of Harvard University. Now an Eretz Israel volume—published by the Israel Exploration Society—is being prepared in Larry’s honor. Joining the ranks of William Foxwell Albright, Nelson Glueck, Harold Louis Ginsberg, Harry Orlinsky and Frank Moore Cross, he is the fifth American to receive such a tribute.

From rural Ohio to Cyprus, Tunisia and Israel, Larry has traversed the world—and helped uncover significant portions of it—breathing new life into ancient texts and giving voice to groups long gone and abandoned. His work has not only provided archaeological background for understanding the Bible, but it has also illuminated the ancient Philistines, Phoenicians and Israelites—shedding light on their identity and how they lived.

His work has been innovative and interdisciplinary. He recognized the value of incorporating the natural sciences and textual sources, such as the Bible, into archaeological research to recover more information and create a more complete picture of the ancient world.

Larry grew up near Dunkirk, Ohio, a land known for farming and football. From there he moved to Cambridge, Massachusetts, and attended Harvard University for both his undergraduate and graduate studies, where he studied the archaeology of ancient Israel with G. Ernest Wright and Frank Moore Cross, among others. He also spent a year-long fellowship at the Hebrew University of Jerusalem.