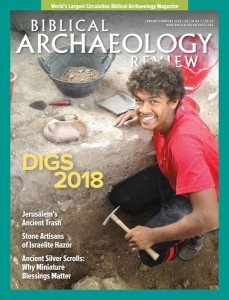 Migration and immigration are not just modern occurrences—both the Bible and archaeology show that ancient Israel was a land of immigrants. Come along and explore several excavations investigating the movement of peoples throughout the Holy Land and learn about the 2018 dig opportunities! END_OF_DOCUMENT_TOKEN_TO_BE_REPLACED

Jerusalem and the Holy Land(fill)

Excavations on Jerusalem’s Southeastern Hill—just outside the “City of David”—have exposed a landfill from the Early Roman period (first century B.C.E. to first century C.E.). This garbage provides insight into residents’ daily lives and habits during a politically, socially, and religiously tumultuous chapter of Jerusalem’s history—when Rome ruled, the Temple stood, and Jesus preached. END_OF_DOCUMENT_TOKEN_TO_BE_REPLACED

The most important city-state in the southern Levant during the second millennium B.C.E., Hazor was known for its magnificent architecture and artifacts that attest to the craftsmanship of its Canaanite population. Following a hiatus of 200 years, Hazor was resettled by the Israelites, who, it seems, inherited one particularly Canaanite craft tradition. Explore the surprising continuity in the production of basalt vessels at Hazor. END_OF_DOCUMENT_TOKEN_TO_BE_REPLACED

The power of hidden writing

In 1979, archaeologist Gabriel Barkay discovered two miniature silver scrolls from a late Iron Age (seventh century B.C.E.) tomb in Ketef Hinnom outside of Jerusalem. When unrolled, the scrolls had tiny texts written on them—similar to the priestly blessing in Numbers 6:24–26. Curiously, though, these texts were hidden from human eyes, which begs the question: Who was their intended audience? END_OF_DOCUMENT_TOKEN_TO_BE_REPLACED

Classical Corner: A Subterranean Surprise in the Roman Catacombs

Biblical Views: Neither Jew nor Greek, Slave nor Free, Male and Female

Strata: Do You Remember?

Strata: Who Did It?

ReViews: The World of Early Christianity