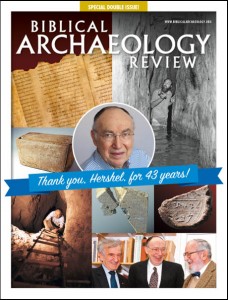 It was the summer of 1991. As I sat at my desk working on my Ph.D. dissertation, the phone rang. “Marty, this is Hershel Shanks of the Biblical Archaeology Society. I’d like to talk with you about the reconstructions of the Dead Sea Scrolls that you and Ben Zion Wacholder have produced.”

My academic introduction to the Dead Sea Scrolls had taken place in the fall of 1986 by means of a year-long seminar at the Hebrew University in Jerusalem taught by Emanuel Tov. As I sat at my desk in Cincinnati, Ohio, nearly five years later, I was contemplating what many would describe—then and now—as “academic suicide”: publishing the work of other scholars, not as my own, but certainly without their permission.

The publication of the first fascicle of the Preliminary Edition of the Unpublished Dead Sea Scrolls (BAS, 1991), reconstructed from A Preliminary Concordance (privately printed, 1988) and edited by me and my doktorvater, Ben Zion Wacholder, and The Facsimile Edition of the Dead Sea Scrolls (BAS, 1991), edited by Robert Eisenman and James Robinson, were the culmination of Hershel’s three-year campaign to “free” the scrolls from the logjam that had produced only one volume in the official Discoveries in the Judaean Desert series between 1969 and 1989.a Given the fact that the following 20 years brought the official series to its completion with 33 additional volumes, it would seem a reasonable conclusion to award Hershel with the honorific “He Who Freed the Dead Sea Scrolls.” I would argue, however, that this judgment is a bit facile, and that Hershel’s role in the ultimate publication and ongoing research in the Dead Sea Scrolls has actually 026been much more consequential.

Coincident to the campaign of Hershel Shanks, another important—but less visible—change was taking place in the academic machinery surrounding the business of scroll research. The third editor-in-chief of the scroll publication team, Harvard professor John Strugnell, was excused from his post in late December 1990 and was replaced by Hebrew University professor Emanuel Tov, whose own scroll assignment—the Greek Minor Prophets Scroll from Naḥal Ḥever—became only the second official publication (1990) in more than 20 years.1 Tov also expanded the research team from about a dozen scholars to more than 50. By the end of Tov’s tenure as editor-in-chief, more than 100 scholars would contribute to the official publication project.

So, of course, the question: What would have happened if Hershel had not carried out his campaign to free the scrolls and had instead granted the new editor-in-chief the opportunity to turn matters 027about? I have actually debated this question on several occasions with Emanuel himself and have concluded—given Tov’s obvious talent for managing such a minor miracle—that the publications in the fall of 1991 that have been credited with freeing the Dead Sea Scrolls actually played a very different, and arguably more important, role.

As I talked with Hershel that summer morning in 1991, my own primary concern was that of any Ph.D. student nearing the goal of a completed and defended dissertation: Will there be a job for me once I finish my degree?b Publishing a bootleg copy of the Dead Sea Scrolls did not appear to me at the time to be a very productive way of ensuring myself employment. Hershel eventually assured me that public opinion was such that this would not be a problem. In this he proved to be right. I was ultimately hired by Trinity Western University because TWU Professor Craig Evans had used the Preliminary Edition fascicles and had become aware of the fact that, with a newly completed Ph.D. in hand, I was looking for work.

The plot thickens: Evans became convinced that he could build on the public and academic interest in the scrolls, both largely a product of Hershel’s campaign. He teamed me up with another newly minted scroll scholar, Peter Flint (ז’’ל—“of blessed memory”), and together we established a graduate program in Biblical studies with a focus on Dead Sea Scroll research.c Peter eventually landed the prestigious Canada Research Chair in Dead Sea Scroll Studies, and I attracted money from the private sector to fund the Ben Zion Wacholder Professorship in Dead Sea Scroll Studies. These chairs and their funding provided for students, supported a number of important research projects, and even enabled the department to hire an additional tenure-track professor. This story can be multiplied several times over as universities around the world took advantage of the “marketability” (not to mention importance!) of the Dead Sea Scrolls to establish similar programs and faculty positions. This is all in large part due to the visibility afforded the scrolls by the campaign mounted by Hershel Shanks.

Coincident to the announcement made by the IAA in the fall of 1991, lifting the restrictions of access to the scroll photos and publications, the Dead Sea Scrolls Foundation was born. This institution raised millions of dollars to assure that the official Discoveries series was completed and that funding would 028be available for Dead Sea Scroll research around the world. Hershel once confided in me regarding his own surprise about the number of invitations he received to speak on the scrolls following the events in the fall of 1991. Even more surprising to him was how much his speaking fee had increased! The public’s willingness to fund scroll research, paralleled by a keen interest from institutional and governmental funding agencies, has been an unexpected boon that can be directly linked to Hershel’s campaign to free the scrolls.

Last, but hardly least, among the direct benefits of Hershel’s campaign is the keen public interest in the contents of the Dead Sea Scrolls. As I know that Biblical Archaeology Review can attest to an increased readership during and following Hershel’s campaign, so those of us who make the scrolls our research focus can attest to overflowing public lectures, fully enrolled classes, successful research proposals, and prosperous book sales. In a world where many of my university colleagues in other disciplines often feel that no one cares, the Dead Sea Scrolls continue to benefit from strong public interest.

As Emanuel Tov himself noted in BAR in 1992, “It is a good time for the scrolls. It is a good time for scholars.”d This continues to be true today, 25 years later. So, Hershel, I hereby grant you the title “He who called forth jobs, generated programs, stimulated means of funding, and—most importantly—educated the public through the publications and events of the Biblical Archaeology Society to value that which the Dead Sea Scrolls have to teach us.”

Thanks for the telephone call, Hershel.