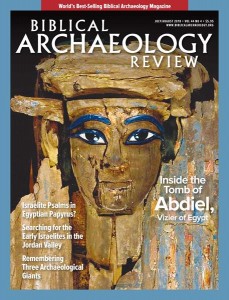 Pharaoh’s Man, ‘Abdiel: The Vizier with a Semitic Name

Several decades ago, Egyptologist Alain Zivie excavated a tomb in Saqqara, Egypt. Discovering secret passageways and hidden staircases while reinforcing collapsing chambers, he and his team carefully uncovered the tomb level by level—until they came face to face with the tomb’s owner himself: ‘Abdiel. The high-ranking ‘Abdiel, who has a Semitic name, served as a vizier to two pharaohs: Amenhotep III and his son, Akhenaten. Join Dr. Zivie as he explores ‘Abdiel’s tomb and identity. END_OF_DOCUMENT_TOKEN_TO_BE_REPLACED

The enigmatic Papyrus Amherst 63 was likely created by the descendants of the Aramean and Judean soldiers who in the fifth century B.C.E. had been stationed at the southern Egyptian border. Recorded in a cursive script derived from Egyptian hieroglyphs, the Aramaic texts of the Amherst papyrus keep challenging what we know about Aramean religion and the history of the Hebrew Bible. END_OF_DOCUMENT_TOKEN_TO_BE_REPLACED

Hidden in the Jordan Valley, Khirbet el-Mastarah may shed light on early Israelite origins. The site contains numerous enclosures and structures, which appear to have been used by a nomadic or semi-nomadic group at the beginning of the Iron Age (c. 1200 B.C.E.). Archaeologists Ralph K. Hawkins and David Ben-Shlomo examine the evidence. END_OF_DOCUMENT_TOKEN_TO_BE_REPLACED

“The Nobles of the People Dug It”: Remembering Three Archaeological Giants

Three significant scholars—who shaped and influenced the field of Biblical archaeology—recently passed away, but their legacies live on. The impact of Lawrence E. Stager, Ephraim Stern, and James F. Strange will be felt for generations to come. END_OF_DOCUMENT_TOKEN_TO_BE_REPLACED

Biblical Views: Where Are the Scribes in the Dead Sea Scrolls?

Strata: Where Is It?

ReViews: Through the Lens of Archaeology: A High-Resolution Image of Ancient Israel

Beyond the Texts: An Archaeological Portrait of Ancient Israel and Judah