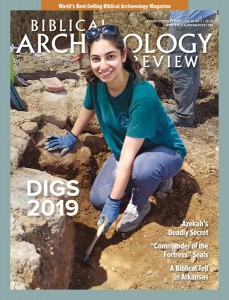 On October 9, 2018, archaeologists at the Israel Museum held a dramatic unveiling of a stone column section that was unearthed during an excavation directed by the Israel Antiquities Authority’s Danit Levy near Binyanei Ha’Uma in Jerusalem.

On the face of the column drum, which had been discovered in reuse as part of a Roman structure, was a 2000-year-old inscription written in Hebrew letters of a style used during the reign of Herod the Great (r. 37–4 B.C.E.). Apparently, someone from the first century B.C.E. jotted his name and city on a column in Jerusalem. According to scholars, the inscription reads, “Ḥananiah son of Dodalos of Jerusalem.”

Exactly who this individual was remains a mystery. Perhaps it identifies the one who carved the column, or perhaps it’s a graffito carved by a passerby. Whoever it was, he left his mark.

At first glance, the inscription appears rather benign. But to those of us who study Jerusalem, its history, and especially the text of the Hebrew Bible and who pay particularly close attention to the spelling of key words, this inscription carries far more linguistic weight than that of the stone itself.