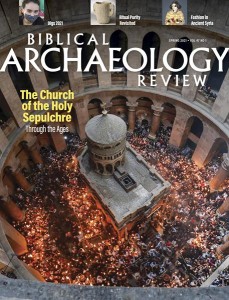 The traditional location of the Last Supper—the Crusader era “Upper Room,” known also as the Cenacle—has one thing going for it: height. The only location-specific information we can pull from the various Last Supper accounts is that Jesus and his apostles secured a large furnished space, the upper room of an unnamed (and presumably wealthy) householder in Jerusalem (Mark 14:12-16). The Cenacle stands tall indeed, nesting above David’s tomb on the heights of Mount Zion. But who knew that Mount Zion’s Christian claim to fame has a competitor—in a basement?

By the entryway to the compound, an English inscription identifies the place as the location of the “Upper Room,” as well as the house of St. Mark (Acts 12:12)—hence “the first church in Christianity.” A Syriac inscription inside the doorway of the church itself ostensibly provides ancient support to the second of these claims.

The church structure is modest: It dates back to the Crusader period (so the guidebooks say) and consists of a single room, under a vaulted ceiling. Lacking pillars, it doesn’t even qualify as a small basilica.