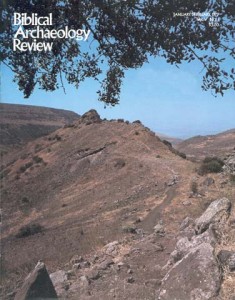 Gamla has been found.

Israelis are calling it the Masada of the north. Masada, south of Jerusalem in the Judean wilderness, was the last Jewish outpost to fall to the Romans thus ending, in 73 A.D., the First Jewish Revolt against Rome. Jews at Masada committed suicide rather than surrender to the Romans.

Gamla, on the Golan Heights, was among the first Jewish strongholds to fall to the Roman military machine that crushed the Jewish revolt. The Romans destroyed Gamla in 67 A.D.

As with Masada, we learn of Gamla from the first century Jewish historian Josephus Flavius. Gamla is located on top of a high, pointed mountain that sits in a wadi—a dry river bed. The mountain is surrounded by “inaccessible ravines”—except on one side where the mountain is joined by a slender neck to the high ranges on either side of the wadi.a But, in the first century, even this ascent to Gamla was treacherous because, as Josephus tells us, the Jews cut a ditch across the connecting neck to prevent the Romans from reaching the city.

Despite the difficult approach, the Roman legions succeeded in bringing battering rams to three points of the city wall. These broke through the wall and then, Josephus says, the Romans poured “through the breach with loud trumpet-blasts, clash of arms and the soldiers’ battle-cries.”