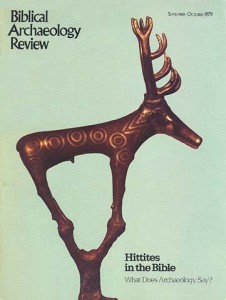 What are they? Petrified Tootsie-Rolls, ceramic hot dogs, toy cigars? Are they perhaps ancient exercise equipment used by pre-Israelite boxers?

Do BAR readers have any better suggestions? If so, send them to us, and BAR will pass them on to the excavators, who readily admit they are stumped by this find of some 278 sausage-like, multi-colored clay hickeys from Biblical Lachish.

The hickeys were recently discovered in Levels VI or V in renewed excavations which began at Lachish in 1973 under the direction of David Ussishkin of the Institute of Archaeology at Tel Aviv University.

Level VI at Lachish represents the densely settled Canaanite city of the 13th century B.C. when Lachish flowered and prospered. That period of its history came to a sudden end, after a fire destroyed the city. According to the excavators, this destruction is attributable to the invading Israelites, as recorded in Joshua 10:31–32:

“From Libnah Joshua and all the Israelites marched on to Lachish, took up their positions and attacked it. The Lord delivered Lachish into their hands; they took it on the second day and put every living thing in it to the sword.”