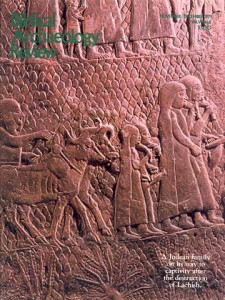 Regarding the article, “Mystery Find at Lachish,” BAR 05:05, soliciting suggestions of BAR’s readers as to the identification of the “petrified Tootsie-Rolls:” if such distinguished company will entertain the guess of a layman, mine is this.

The clay rolls were test pieces, used to determine when the pottery baking kiln was at the proper temperature before the potter began firing his works. If so, it is reasonable that, after the rolls had served their purpose as “ancient oven thermometers,” the potter threw them away—probably outside the shop.

Children are prone to pick up such cast-off items, and discard them when their interest wanes. As a child, I did the same thing at a nearby clay mold toy factory. They threw broken wooden molds and pieces of clay out the factory door. Such childish scavenging may account for the wide distribution of the other pieces found in Lachish.

In response to your question, “Can BAR readers identify puzzling clay objects?” in “Mystery Find at Lachish,” BAR 05:05, I would like to suggest a possibility.