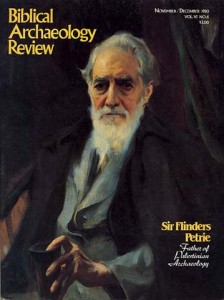 The findings of archaeologists sometimes seem to confirm the Biblical text. At other times, the excavation results present a problem.

Perhaps the best known case of the latter is Jericho. Most scholars date the Israelite conquest of Canaan to the Late Bronze Age, to a time (13th century B.C.) when, according to Jericho excavator Kathleen Kenyon, there was no settlement at Jericho, let alone a city whose walls could be trumpeted down. According to the Bible, the next city to fall to the Israelites, was Ai. There is a problem in this case too. Professor Joseph Callaway, who excavated Ai, found no settlement from that period.

The well-known American scholar, William F. Albright, placed the Patriarchal Age in what archaeologists call MBI or Middle Bronze I. He was supported by the famous Hebrew Union College archaeologist, Nelson Glueck. They reasoned, largely on the basis of Glueck’s surface surveys done in the area south of the Biblical Negev, that the patriarchal stories preserve descriptions of conditions in the Negev which correspond only to archaeological remains from MBI. Albright dated this period from the 21st to 19th centuries B.C.