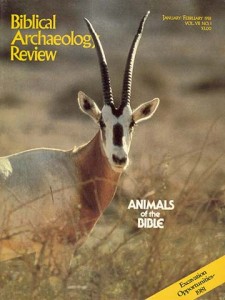 Tom Frank is dead. He was only 47. Death came suddenly and unexpectedly on October 2. True, he had had cancer in his 30’s and a week before he died he had an operation. But the cancer had been arrested and he seemed to be recovering well from the operation. He was walking down the hospital hall with the help of an attendant when he suddenly collapsed from a blood clot in his lung, and died. No one seems to know why.

Tom Frank—Harry Thomas Frank was the name he used in his writings—was for many years chairman of the Oberlin College Religion Department, Oberlin, Ohio, a director of excavations at Tel el-Hesi in Israel, and a member of BAR’s Editorial Advisory Board. He was also associate editor of the Biblical Archaeologist and was slated to become one day the editor of that prestigious journal.

His writings include Bible, Archaeology and Faith (1971), and Discovering the Biblical World (1975), two popular volumes which relate archaeological findings to the Biblical text. At his death he was completing work as a principal consultant on a major new Biblical atlas to be published by the Reader’s Digest.

Those who sat in his classes or attended his lectures will remember him more as an inspiring teacher rather than as an original scholar. He knew his material deeply. He spoke with grace. He was serious and light at the same time. He was thorough without being plodding.