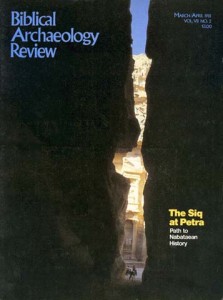 When you look at a map of the Near East, you notice many place names that include as their element the word “tell.” You can find names beginning with “tell” in Israel, Egypt, Syria, Lebanon, Jordan and Iraq. In Arabic and Hebrew the word “tell” means “a mound, a ruin-heap, a hill on which a city stood”—an ancient buried city. When the Arabic word is written in English it is spelled “tell”; the Hebrew word is spelled “tel” in English. The Arabs used this term for renaming places which had similar characteristics.

Most of the “tells” are mounds with steep slopes and a flat top. From a distance, tells are especially noticeable particularly when they are situated in a valley.

A visitor to a “tell” is immediately struck by the vast amounts of broken pottery lying on the ground—evidence of ancient occupation. Sometimes it is even possible to detect wall lines and other architectural features.

A “tell” consists of a succession of cities built on top of one another. Usually the first occupation of the site was on a low hill overlooking the surrounding area. Each successive city was built on the ruins of the previous one. Each city came to an end, however, destroyed by an invading army or, sometimes, abandoned because of changing climatic or political conditions. Each city left a layer of deposit on top of which the next city was built. The archaeologists use the term stratum for each of these layers (strata, is the plural). The result of this build-up resembles a multi-layered 067chocolate cake, each layer representing a destroyed or abandoned city.