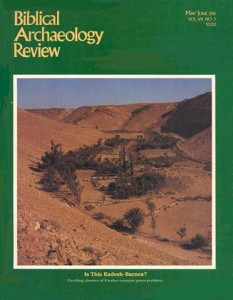 One of the best-known and highly-respected archaeologists in the world is urging that the term “Biblical Archaeology” be dropped. He is Professor William G. Dever, chairman of the Department of Oriental Studies at the University of Arizona in Tucson.

“The sooner we abandon it [the term ‘Biblical Archaeology’] the better,” he says.

Dever is not without his followers. And at conferences, symposia, lectures and in private conversations the theme is developed and repeated. “We ought to stop talking about ‘Biblical Archaeology’,” Dever urges archaeologists because, he says, “there probably is no such thing.”

Dever’s own stand is clear: “I do dissociate myself from the term ‘Biblical archaeology.’”

For him Biblical archaeology is not “even a discipline at all in the academic sense.”

Seasoned BAR readers are accustomed to some of the tensions and contradictions that beset Biblical archaeology. So it will come as no surprise to these readers to learn that Bill Dever is the editor of a book entitled, of all things, Biblical Archaeology. From 1967 to 1976 he has also served on the editorial board of a professional journal named Biblical Archeologist. (His resignation in 1976 was a personal matter having nothing to do with the journal’s name or subject matter.)

Dever is also author of the entry on “Archaeology” in the new Supplement to the Interpreter’s Dictionary of the Bible. In this article, he states that “archaeology in its broadest sense is the only possible source of material evidence for additional illumination of the Biblical text.”