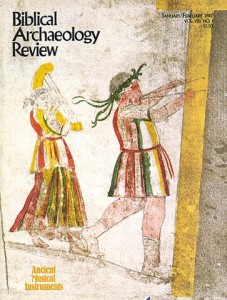 Except in Woody Allen movies, there are no “man-in-the-street” brain surgeons. No journal that I know of invites its readers to spend two weeks as volunteer atomic physicists.

It’s different with archaeology. From the very beginning, the amateur was a key figure. Heinrich Schleimann, who revealed the treasures of ancient Troy in the 1870’s by using Homer as a guidebook, was an import-export merchant, not an academician. John Lloyd Stephens, who, a few decades earlier, hacked his way through the thick Yucatan underbrush to rediscover 047ancient Mayan sites, was trained as a lawyer. His post as charge d’affaires in Mexico was simply a front to indulge his archaeological bent. Even Thomas Jefferson, the quintessential “Renaissance man” added an archaeological notch to his accomplishments with his studies of Indian mounds in Virginia. (See “Who First Excavated Stratigraphically?” BAR 07:01, by William Steibing, Jr.)

Throughout the 19th century and into the 20th, the gentleman dilettante played a significant role in archaeology. Men with money and leisure could indulge their romantic visions, often with remarkable success. How appropriate that Macchu Picchu in Peru was discovered not by a methodically-planned expedition but by a Connecticut Senator with wanderlust, Hiram Bingham. Archaeological lore abounds with similar examples and personages.