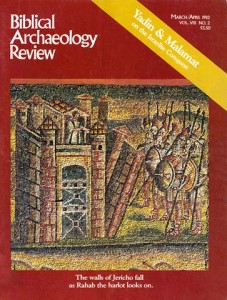 The other view is that the occupation was initiated by peaceful Israelite infiltration of largely unoccupied hill country. Then increasing Israelite pressure led to the collapse of the main Canaanite cities.

The first view is associated especially with the great American archaeologist, William Foxwell Albright, who pioneered in the use of archaeological materials to elucidate the Bible. The second view is associated with scholars of the so-called German school: Albrecht Alt and his follower Martin Noth, who based their views principally on a study of the literary traditions contained in the Bible, and, more recently, Manfred Weippert who attempts to conform archaeological evidence to this interpretation of the literary traditions.

Since I disagree with the Alt school, I shall let Professor Weippert summarize its views. In a recent book entitled The Settlement of the Israelite Tribes in Palestine, Weippert states: