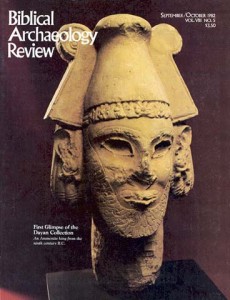 Joseph Aviram, for 40 years the chief administrator of the Israel Exploration Society, and William G. Dever, former director of the W. F. Albright Institute of Archaeological Research in Jerusalem, have been named recipients of the Percia Schimmel Award for 1982.

The Percia Schimmel Award is given annually by the Israel Museum for “distinguished contribution to archaeology in Eretz Israel and the lands of the Bible.”

As administrative director of the Israel Exploration Society, Aviram has had an enormous influence on archaeology in Israel. Under his direction, the Society has become the umbrella organization for all the archaeological activities of Israel’s scientific institutions. During Aviram’s tenure, its projects have included excavations at Beth She’arim, Masada and the Judean Desert Caves, and the publication of Eretz Israel (14 volumes), The Encyclopedia of Archaeological Excavations in the Holy Land (4 volumes), and The Israel Exploration Journal (over 30 volumes).

Dever is now chairman of the Department of Oriental Studies at the University of Arizona in Tucson. He first came to Israel as a student in 1962. During his 13 years as a resident of Jerusalem, he was Director of the Institute of Archaeology at Hebrew Union College and led excavations at Tell Gezer.

He also served as head of the Albright Institute, formerly the American School of Oriental Research in Jerusalem.