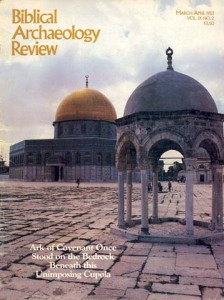 It is almost axiomatic among scholars that no trace of the Jewish Temple is to be found on Jerusalem’s imposing Temple Mount.1

More recently, Dame Kathleen Kenyon echoed the same thoughts. Just before her death in 1978, the eminent British archaeologist wrote a small volume entitled The Bible and Recent Archaeology that appeared posthumously in which she stated, “Absolutely nothing survives of the Temple built by Herod” (the Second Temple).3

Despite this scholarly consensus, there are, however, traces of remains—a line of stones, a worked rock-mass, a cistern—and these ancient relics are sufficient, when added to the literary sources, to locate precisely the Second Temple, and even to trace out the First Temple, on the Temple Mount.