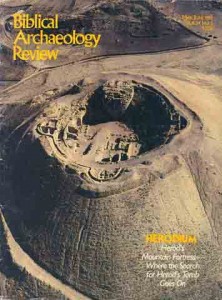 We have not found Herod’s tomb, but we have examined a structure that may be Herod’s family tomb. It is not at Herodium but is in Jerusalem itself opposite the Damascus Gate, the most elaborate entrance to the Old City.

As with Herodium, my interest in the Jerusalem structure at first had nothing to do with any interest in the burial of Herod or his family. The Jerusalem structure was intriguing because it contained some rare stonework called opus reticulatum. Opus reticulatum is part of a Roman wall-building technique used mainly in the period from the first century B.C. to the second century A.D. It was widely employed in Italy at this time but is unusual in the Near East. Opus reticulatum has been found, however, in Herod’s major winter palace in Jericho,a at Baniasb in northern Israel, and in the structure opposite the Damascus gate.

The technique involved laying uniformly cut small stones in diagonal rows; we call this patterned structure opus reticulatum. Behind this lattice pattern of cut stones, concrete was poured as the strong core of the wall. Plaster was then applied to the outer surface of the wall, completely covering the opus reticulatum. This plaster was some times decorated with colored frescoes. The lovely stone pattern of the opus reticulatum, which the archaeologist sees today because the covering of plaster has disintegrated, was meant by Roman engineers to be only a useful and invisible internal form establishing the smooth contour of the final plastered surface.

I did not discover the opus reticulatum wall opposite the Damascus Gate. It was discovered more than 100 years ago by Conrad Schick, the famous Swiss architect and archaeologist who discovered so much of ancient Jerusalem’s remains.

In a way, however, I rediscovered the wall opposite the Damascus Gate. Not only was its original discovery neglected by most later scholars (it is hardly mentioned in the literature), but today the wall itself is completely covered. It is hidden under and between some houses. I successfully relocated the site, and in November 1977, Sarah Ben-Arieh and I excavated several deep sections adjacent to the opus reticulatum wall.

These excavations confirmed that the wall was part of a round structure, as Schick observed. But our investigation also revealed that there were two concentric circles of 055walls. Schick had seen only the outer one.

In addition to the delicate opus reticulatum, a few decorated ashlarc blocks in Herodian style were found—some by Schick and the others by us. These stones barely hint at what must have been the original beauty and magnificence of the structure.

This structure may well have been Herod the Great’s funerary monument in Jerusalem and the place where 059Herod’s family was buried.

The structure is located on a knoll or ridge just opposite a major entrance to the city—surely prime real estate for many centuries. Although the present Damascus gate was built only in the 16th century by Suleiman the Magnificent, archaeologists have discovered beneath it the remains of an older but equally imposing gate from the Roman and Herodian period. So in Herod’s time the round structure must also have been located opposite a main entrance to the city.

Even more important than the location of the structure is its plan. It is strikingly similar to the plans of many round tomb-monuments in the Roman world. Indeed, this plan was a favorite of eminent figures in the Roman world, as the tombs of Augustus and Hadrian in Rome witness. Augustus’s tomb is of special significance because it is contemporaneous with this Jerusalem monument. Emphasizing this significance is the fact that our Jerusalem structure surely dates from the Herodian period, as indicated not only by the decorated ashlars but also by the pottery uncovered in our soundings at the site.

Josephus, the Jewish historian who lived a generation or two after Herod, twice mentions “Herod’s Monument” in Jerusalem (The Jewish War, V, 108, and V, 507). Unfortunately, Josephus gives no description of this monument. Scholars have long interpreted these references as indicating that Herod’s family members were buried in this monument, because Herod himself was buried at Herodium.

It is therefore my belief that this structure was originally a magnificent edifice that was Herod’s Monument in Jerusalem, referred to by Josephus, and that also served as a mausoleum for Herod’s family.

For those thousands of Jerusalem tourists who have been shown “Herod’s Family Tomb” about 200 feet south of the King David Hotel, I should perhaps say a few words about this contender. This tomb, discovered in 1892, consists of five underground rooms in the shape of a cross. Although the rooms are carved out of the rock, parts of the walls are built of beautiful Herodian-style ashlars. At the time of its discovery, the tomb contained two outstanding sarcophagi. The entrance to the tomb is protected by a large rolling stone.

There is no doubt that this tomb was indeed the final resting place of an important Jerusalem family. But there were many such families in Jerusalem, and Jerusalem is crowded with ancient tombs that are not round towers.

Given the certain Herodian date of the round structure outside Damascus Gate, the similarity of its plan to Augustus’s tomb in Rome, and the use of the unusual opus reticulatum construction, it is far more likely that this ancient tower was built by Herod as his family tomb and as his own funerary monument in Jerusalem.

In 1879, Conrad Schick, the famous Swiss architect and archaeologist, discovered and explored and drew this section of opus reticulatum wall near the Damascus Gate in Jerusalem. In 1977, Israeli archaeologist Ehud Netzer returned to Schick’s site, where he uncovered more of the patterned stonework, for example the small area below at the end of an excavation trench. Netzer noted that all of this opus reticulatum stonework was part of a circular wall 100 feet in diameter. Netzer claims that the wall encloses Herod’s family tomb.

Opus reticulatum was a Roman building technique common in Italy but rarely seen in the Near East. An example of it is seen below from Herod’s winter palace at Jericho. The opus reticulatum wall at left has been restored above the dark lower level of the wall, as part of a BAR preservation project. It clearly shows the characteristic graceful lattice pattern of stones.

The opus reticulatum in effect provided a form for the creation of a wall that could be straight or curved. In the original wall, concrete was poured behind the diamond-shaped rows of stones, and plaster was smoothed over the front of them. Here at Jericho, some well-preserved plaster still adheres to the lower courses of the walls. Sometimes frescoes were painted on the plaster.

Plans and isometric drawings of the tomb of Augustus and of Herod’s family tomb in Jerusalem. The plan of Augustus’s tomb (above), built in Rome in 28 B.C., is quite similar to that of the round monument near the Damascus Gate (below), built by Herod at about the same time.

Only a few sections of the Jerusalem structure have been excavated. However, the plan of the building so closely follows the plan of Augustus’s tomb (above)—much of which still survives—that it is possible to reconstruct the tomb, at least on paper: below is an artist’s idea of the original appearance of Herod’s family tomb. It’s easy to see that Augustus’s tomb may have been Herod’s model for his own family tomb-monument.

Two large, finely worked sarcophagi were found in situ in the longest chamber of a tomb near the King David Hotel that most guidebooks call “Herod’s Family Tomb.” The photo below shows details of the decorated sarcophagus in the background. Delicate vines, leaves and rosettes are carved into both the box and the lid.

The large, perfectly joined Herodian-style ashlars of this tomb’s walls help date it to the first century B.C., contemporaneous with the round structure opposite the Damascus Gate. Popular identification of this tomb near the King David Hotel as that of Herod’s family persists despite the author’s strong evidence that the tomb near the Damascus Gate actually served as Herod’s family funerary tower. The pictures here are from the archive of the original investigations of this tomb and were taken more than 60 years ago. Below, is a plan of the tomb near the King David Hotel. Five rooms carved out of a rocky hill form the shape of a cross. In the longest room, the two sarcophagi are outlined where they were originally found.

Ehud Netzer (d. 2010) was a Professor Emeritus at the Hebrew University’s Institute of Archaeology. An authority on the architecture of Herod the Great, he excavated at sites throughout Israel and Jordan—including Jericho, Herodium and Masada, where he worked with the late Yigael Yadin. Netzer died on October 27, 2010 from a fall at Herodium where he had been digging for 38 years in search of Herod’s tomb.