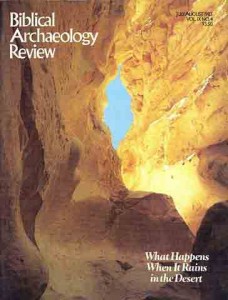 Nearly 35 years ago, Bedouin tribesmen searching for more scrolls near the original find on the northwestern shore of the Dead Sea discovered the now-famous Qumran cave 4. Cave 4 proved to be the richest of all the Qumran caves, containing fragments of over 500 scrolls.

One of the scroll fragments from cave 4 is known as the “Wiles of the Wanton Woman”1 and reflects the Essene fear of, as well as contempt for, women. The text on this fragment is remarkably similar to certain passages from Proverbs; indeed, the Qumran fragment was apparently modeled after chapters 5 through 7 of Proverbs.

While we are comparing, we should also look at a passage from the Wisdom of Ben Sirach (Ecclesiasticus). Ben Sirach was roughly an elder contemporary of the Qumranites. His book is part of the canon in the Roman Catholic Bible. For Jews and Protestants, it is part of the Apocrypha.

The passage from the Qumran cave 4 fragment is a warning against falling into the traps of the seductive woman. It reads in part as follows:

… She lies in wait in secret places

At every corner she will sit.

In the city’s squares she displays herself,