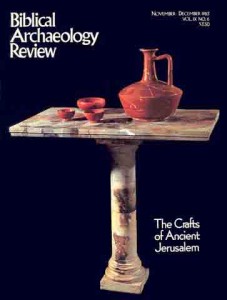 The first-century Capernaum synagogue in which Jesus preached has probably been found. Because more than one synagogue may have existed in Capernaum at this time, we cannot be sure that this new find was Jesus’ synagogue. But this recently discovered first-century building is certainly a likely candidate.a

At the moment, the synagogue is not a very impressive-looking structure, but it is there nevertheless. And for millions of Christians, that is the important thing. For Jews, too, this find adds important new evidence of how their people worshipped 2,000 years ago. Only a handful of such synagogues are known.b

At present, this ancient Capernaum synagogue has been only partly excavated. It may never be fully excavated and exposed because that would require dismantling the beautiful white limestone synagogue built several centuries later on top of the earlier synagogue.

Franciscan archaeologists initially exposed part of the first-century A.D. synagogue in the mid-1960s, but at that time the evidence was not clear enough for them to make the claim of its first-century date. More excavation was needed—this was undertaken in 1981. Now we have the evidence that was lacking.

The synagogue at Capernaum has been known since 1838 when the American orientalist Edward Robinson first explored and identified a number of beautiful architectural fragments in the ruins of Tell Hum, as the site was known locally, as the remains of an ancient synagogue.