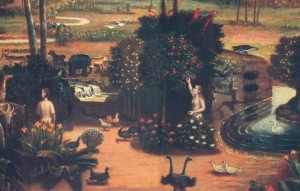 According to the Bible’s creation account, after making the heavens and the earth, God created humankind. The Adam and Eve story in Genesis 2 states that God formed Adam out of the dust of the ground, and then Eve was created from one of Adam’s ribs. But was it really his rib? In a BAS Library special collection of articles, learn about a controversial interpretation of the creation of woman, and explore other themes related to Adam and Eve in the Bible.

Was Eve Made from Adam’s Rib—or His Baculum?

Did Eve Fall or Was She Pushed?

How Did Adam & Eve Make a Living?

Was Eve created from Adam’s rib? In “Was Eve Made from Adam’s Rib—or His Baculum?” by Ziony Zevit, a controversial Bible translation is put forward. The Book of Genesis tells us that God created woman from one of Adam’s ribs, but Zevit contends that Eve actually came from a different part of Adam’s body—his baculum.

In “Creating Woman,” Mary Joan Winn Leith looks at the etiological and euphemistic support for Ziony Zevit’s interpretation of how Eve was created, and she considers how this would have fit into ancient views of biology. Then Leith focuses on an interesting part of the Adam and Eve story in the Bible: the “punishment poem” in Genesis 3:14–19.

The first woman has been blamed for a host of ills—from inspiring witches to being the very source of sin. Tracing the roots of Eve’s bad reputation leads not to Genesis (as many people assume), but to an obscure set of texts known as the pseudepigrapha, says Susan L. Greiner in “Did Eve Fall or Was She Pushed?”

“The devil’s gateway, the unsealer of that forbidden tree, the first deserter of the divine law”—so Eve was described by the Christian theologian Tertullian (c. 160–240 A.D.). And it’s been downhill since then for the popular image of the Biblical mother of all humanity. Downhill, that is, until feminist Bible critics started studying the creation stories in Genesis 2–3. In “Eve and Adam—Is a Feminist Reading Possible?” Bible scholar Pamela J. Milne offers a lucid and fascinating interpretation of the Eve and Adam story, and compares her own view with many others that have been promoted, past and present.

Does the Garden of Eden story in Genesis tell us how primitive peoples actually lived? Well, maybe. In “How Did Adam and Eve Make a Living?” Frederic L. Pryor and Eleanor Ferris Beach draw on anthropological research and on the economics of primitive societies to demonstrate that the description of Adam and Eve’s transition from gatherers—in Eden—to farmers/shepherds—after the expulsion from Paradise—closely resembles the evolution of early humans.