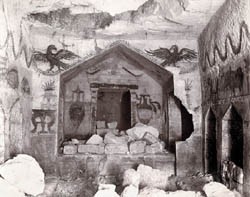 Art provides an unparalleled record of purposeful expression in the ancient world. Hellenistic and Roman-era art from the Biblical world shines a spotlight on Judean identity and cultural influences during a formative period in the region’s history. From the fourth century B.C.E., when Alexander the Great conquered Judea, through the Roman occupation in the first century B.C.E. and onward, Jews were exposed to Greco-Roman culture. Much of the population adopted western ways of life to elevate their political and social standing in the eyes of their rulers. Hellenistic and Roman-era art is an expression of the reconciliation of Biblical and Greco-Roman culture. BAS editors have arranged a special collection of articles on ancient art in and of the Biblical world in a BAS Library Special Collection.

Helios in the Synagogue

In “Under the Influence,” Martin Goodman provides an overview of how Greek culture permeated Judea from the time of Alexander the Great to the end of the Roman Empire. Hellenism brought with it new artistic styles, architectural forms and literary genres that helped give new expression to traditional forms of Jewish identity and culture. This article provides a framework for understanding the Jewish world during a critical period in its history and presents examples of the art produced during a time of great cultural fluidity.

Some of the most spectacular examples of Hellenistic art in Judea are the tomb paintings from the site of Tell Sandahanna (Biblical Maresha, Hellenistic Marisa). Until recently, our only record of the wall paintings had been fanciful—and inaccurate—color lithographs made at the time the paintings were discovered over a century ago. In “Marisa Tomb Paintings,” David M. Jacobson presents newly-available photography revealing long-lost details of these important artworks.

Winter rains uncovered a mesmerizing Hellenistic relief of the Greco-Roman god Hercules at Hippos/Sussita, overlooking the Sea of Galilee. Arthur Segal and Michael Eisenberg’s “Hercules in Galilee” contrasts this symbol of Hellenization with Jewish Tiberias on the other side of the lake.

Helios, the Greco-Roman sun god, was a popular subject in ancient synagogue mosaics. Did some Jews worship him? In “Helios in the Synagogue,” Lucille A. Roussin examines a floor mosaic in a Late Roman synagogue in Sephhoris that depicts Helios surrounded by the 12 signs of the zodiac. The author explores why such blatantly pagan symbols would appear so frequently in ancient synagogues.

Theodore H. Feder presents an example of reverse cultural influence during this time. “Solomon, Socrates and Aristotle” discusses a painting found at Roman Pompeii that contains the earliest known depiction of a Biblical scene. Two famous onlookers in the crowd reveal much about the place of Biblical culture in the Greco-Roman world.