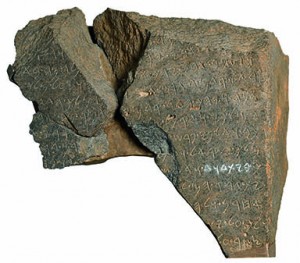 What are the most important inscriptions that have confirmed or reshaped our understanding of the Biblical past? BAS editors have compiled a special collection of Biblical Archaeology Review articles exploring the oldest references to the Israelites, the House of David and the text of the Hebrew Bible along with a series of contemporaneous inscriptions mentioning New Testament figures, from King Herod and his royal family to Pontius Pilate.

When Did Ancient Israel Begin?

The Riches of Ketef Hinnom

According to the Bible, David ruled in the tenth century B.C.E., using the traditional chronology. Until 1993, however, the personal name David had never appeared in the archaeological record, let alone a reference to King David. That led some scholars to doubt his very existence. In 1993, however, the now-famous Tel Dan inscription was found in an excavation led by Avraham Biran. Written in ninth-century B.C.E. Aramaic, it was part of a victory stele commissioned by a non-Israelite king mentioning his victory over “the king of Israel” and the “House of David.” Whether or not the foreign king’s claim to victory was true, it is clear that a century after he had died, David was still remembered as the founder of a dynasty. Discover this groundbreaking inscription in “‘David’ Found at Dan.”

Discovered in 1868, the Moabite Mesha stela is the longest monumental inscription discovered anywhere in Palestine—east or west of the Jordan. In many ways the Mesha stela is similar to the stela from which the Tel Dan fragment came. Both stelae are made of black basalt. Both are (or were) approximately three feet high and two feet wide. Both are written in an almost identical Semitic script—close to the script used by the contemporaneous Israelites. Both date to the ninth century B.C.E. Both were erected by enemies of Israel to commemorate their victory. Even the languages are connected—both are Northwest Semitic, Moabite in the case of the Mesha stela (it is often called the Moabite stela or Moabite stone) and Early Aramaic in the case of the Tel Dan stela. Both also contain specific references to the “King of Israel” (melech yisrael). In “‘House of David’ Restored in Moabite Inscription,” epigrapher André Lemaire argues that the Mesha stela also contains mention of the Judahite royal house.

Longtime BAR readers are familiar with the Merneptah Stele, now in the Egyptian Museum in Cairo, which is generally recognized as containing the oldest extra-Biblical reference to Israel. The hieroglyphic inscription can be dated quite precisely to somewhere between 1210 and 1205 B.C.E. But is it the oldest? Three German scholars say they may have found another hieroglyphic inscription almost 200 years older naming “Israel.” Does this new text contain echoes of an earlier Exodus? Take a look at the earliest mentions of Israel in “When Did Ancient Israel Begin?” by Hershel Shanks.

Excavating the Iron Age necropolis of Ketef Hinnom in Jerusalem, archaeologist Gabriel Barkay discovered two pure silver amulets inscribed with the oldest known quotations from the Hebrew Bible. The texts predate the Dead Sea Scrolls by nearly 400 years and offer new evidence of the origins and date of the Bible. But this is only part of the Ketef Hinnom story. In “The Riches of Ketef Hinnom,” Barkay discusses the remarkable history of this site outside the walls of the Old City.

The antiquity of the Hebrew Bible underscores the importance of archaeology to provide cultural contexts for the often-forgotten empires and traditions it references, but inscriptions provide equally important cultural contexts for the New Testament. In “New Testament Political Figures Confirmed,” Lawrence Mykytiuk examines the political figures in the New Testament who can be identified in the archaeological record and by extra-Biblical writings. Find out who makes the cut.