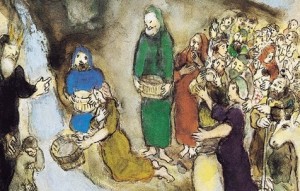 For as long as there have been Biblical texts, there have been Biblical hermeneutics, or Biblical interpretations. The lens through which we read the Bible affects the way we understand the scriptures. In this BAS Library special collection of Bible Review articles, examine Biblical texts through different lenses with the aid of top Bible scholars, and discover just how illuminating varied approaches to the Bible can be.

The Bible: Word of God in Human Words

How Judaism and Christianity shape the Canon differently
Bible Review, Jun 1998
by James A. Sanders

If The Bible’s So Patriarchal, How Come I Love It?

Today, many stoutly defend the authority of the Bible on the basis of Biblical literalism, believing that the Bible contains the literally inspired words of God. But, as Bernhard W. Anderson explains in “The Bible: Word of God in Human Words,” this popular view fails to account adequately for the Bible’s very human words, which reflect the limitations of human speech, the influence of the cultural environment, and the sociological situation of ancient Israel (Hebrew Bible) or of the early church (New Testament).

Most people think that the Old Testament and the Hebrew Bible are two names for the same thing. Actually, they are quite different, even though all of the books of the Hebrew Bible are indeed included in the Old Testament. As James A. Sanders shows in “‘Spinning’ the Bible,” the difference in the order of the books gives each collection its own powerful—yet divergent—message.

We like to think of Holy Writ as unchanging, but the ancients didn’t. A study of the Dead Sea Scrolls reveals that texts could exist in different forms—even be consciously modified—without losing their sanctity. Sidnie White Crawford demonstrates in “The Fluid Bible” that for Second Temple Jews, the authority of a text lay in its general message rather than in its precise words.

“If the Bible’s So Patriarchal, How Come I Love It?” Phyllis Trible asks in her article of the same name. While some feminist Bible scholars believe the Biblical text is irredeemably misogynist, Trible seeks to discover the text’s “other voices,” the remnant of nonpatriarchal material that is often preserved in the Bible’s conflicts and contradictions. To demonstrate her method of reinterpretation, Trible focuses on the Garden of Eden story, giving an exegesis that sees the tale as a critique of patriarchy.

The task of the Biblical text critic is to try to make sense of Biblical verses. The text critic faces many kinds of problems. In “Caution: Bible Critic at Work,” David Noel Freedman proposes two cases where he recommends emending the text—actually changing the Biblical text as it has come down to us to a version he considers more original. Freedman believes that there is a better text than the one we know.