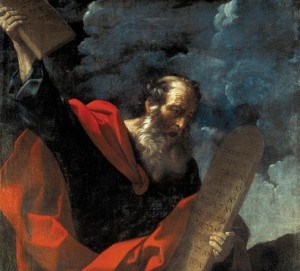 Moses’ story is told in the Book of Exodus, but it starts in Genesis with the story of Abraham and his family with whom God makes a covenant. Generations later, the Biblical Moses draws the extended family together in the form of a nation with a structure and code of law, given to him on Mount Sinai. In a BAS Library special collection of articles, examine the incredible life of the Biblical lawgiver who led the Israelites out of Egypt.

Moses: The Private Man Behind the Public Leader

Moses: From Vigilante to Lawgiver

Why Moses Could Not Enter The Promised Land

In Death as in Life: What the Biblical Portraits of Moses, Aaron and Miriam Share

In the Book of Exodus, Moses begins his adult life caring for the flocks belonging to the family of his wife Zipporah. When his life story ends in Deuteronomy, he is still a shepherd of sorts, but one who cares for a much greater flock—the people of Israel. In “Moses: The Private Man Behind the Public Leader,” author J. Daniel Hays suggests that to truly learn who Moses was, we must read his story from Exodus through Deuteronomy as a narrative whole, and we must weigh his public career together with events in his private life.

Three months after Moses was born, his mother placed him in a basket and hid him among the reeds along the Nile so that he would survive Pharaoh’s decree to murder all Hebrew baby boys. When Pharaoh’s daughter came to the river to bathe, she spied the baby and adopted him as her own. According to Exodus, Moses was named for his rescue from the water; his Hebrew name means “drawing out” (for instance, drawing something out of a river). But Ogden Goelet suggests in “Moses’ Egyptian Name” that the name has a wholly different, but equally significant, Egyptian meaning.

Impulsive and violent, the young Moses was like an Israelite Dirty Harry, meting out his own justice with neither legal nor divine sanction. What happened to turn this loose cannon into the leader who led the Israelites out of Egypt? In “Moses: From Vigilante to Lawgiver,” William H.C. Propp explores Moses’ transformation into the deliverer of his people.

Despite their prominence in the Israelites’ liberation from Egypt, neither Moses nor his older brother Aaron were permitted to enter the Promised Land. Why were they condemned to die in the wilderness? The Torah, the five books of Moses, offers not one but two explanations for this puzzle, as William H.C. Propp shows in “Why Moses Could Not Enter The Promised Land.”

Although Moses constantly struggles with God’s ban on entering the Holy Land, God is adamant: “Enough!” he scolds Moses, as if a recalcitrant son. “Never speak to Me of this matter again!” (Deuteronomy 3:26). In the article “In Death as in Life: What the Biblical Portraits of Moses, Aaron and Miriam Share,” Erica S. Brown contemplates how the lives of Moses and his siblings unlock the key to the more mysterious aspects of their deaths. Moses’ final resistance against God at the time of his death, she finds, is characteristic of a man who was quick to fight God for his people and his people for God.