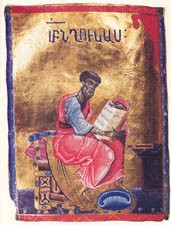 Was The Gospel of Matthew Originally Written In Hebrew?

To Be Continued ... The Many Endings of the Gospel of Mark

Who Wrote the Gospel of Luke?

Matthew, Mark, Luke and John—the four canonical Gospels—have come down to us only in Greek. The Gospels we use today—in English or in other languages—are translations from old Greek manuscripts. By contrast, what Christians call the Old Testament—the Hebrew Bible—was written in Hebrew, with a few short sections in a sister language called Aramaic. Were the canonical Gospels originally written in Greek? In “Was the Gospel of Matthew Originally Written in Hebrew,” Biblical scholar George Howard presents formidable evidence that at least one of the Gospels, and perhaps more, may originally have been written in Hebrew! Learn what Howard discovered in a little-known 14th century manuscript preserving the type of Hebrew written in the first century.

How did Mark end his gospel? It’s difficult to tell from the nine versions of his last chapter that we have today. The shortest version ends with the empty tomb; Jesus is never seen again. In the longest, Jesus reappears three times before he rises to heaven. The difference is critical—to Bible scholars trying to determine which ending is the earliest, to biographers mapping the course of Jesus’ life, to historians trying to trace how it came to be recorded, to theologians contemplating Jesus’ resurrection, and to curious readers who simply want to know how the story ends. In “To Be Continued ... The Many Endings of the Gospel of Mark,” Michael W. Holmes examines the various versions to rethink our understanding of the gospel.

In “Who Wrote the Gospel of Luke?” Mikeal Parsons investigates this seemingly obvious question. The gospel itself never reveals the author’s name. However, over the centuries, numerous traditions have evolved around this somewhat shadowy evangelist: Luke is credited with writing not only his gospel but the New Testament Book of Acts as well. He is portrayed as a physician, a friend of Paul’s and even a painter, and is described as a gentile writing for a gentile audience. “Who Wrote the Gospel of Luke?” investigates the individual behind the author of two of the most significant contributions by an early Christian to our understanding of the founder of Christianity and its first followers.

Commentators have long debated whether John provides the truest portrait of Jesus or the least accurate. But perhaps they should be asking another question altogether: What kind of book is the so-called Gospel of John? The brisk dialogue and memorable sayings of the Synoptics give way to a handful of elaborate set pieces in John. In “The Un-Gospel of John,” Robin Griffith-Jones considers this more spiritual gospel. While the other gospels tell Jesus’ stories from the outside, John reveals the heart of Jesus.

In these four Bible Review articles, acclaimed scholars shed new light on our understanding of the recording of Jesus’ life and deeds. Every article ever published in Biblical Archaeology Review, Bible Review and Archaeology Odyssey are available online in the BAS Library.