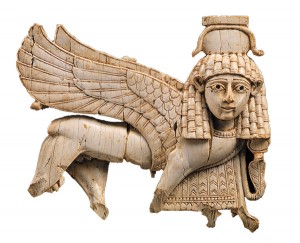 Reports showed that in recent years the Islamic State (referred to as ISIS or ISIL) destroyed the ninth-century B.C.E. North-West Palace of King Ashurnasirpal II at the ancient Assyrian site of Nimrud. As Assyriologist Eckart Frahm told YaleNews, any major destruction at Nimrud or other ancient Assyrian cities in Iraq “would be one of the worst cultural heritage disasters of all times.” BAS editors have compiled a special collection of articles from Biblical Archaeology Review, Bible Review and Archaeology Odyssey to commemorate the once-dazzling city of Nimrud. We seek to make known what Nimrud was in antiquity as well as what it means in modern times, to remember whatever may have been irreparably lost, and to inspire future excavation—whenever that should become possible again.

Part I: The First Excavators of Nimrud

Mad to See the Monuments


Part III: Nimrud and the Bible

Did King Jehu Kill His Own Family?

The ancient Assyrian city of Nimrud (known in antiquity as Kalhu) lies in the Nineveh plains on the northeast bank of the Tigris River, 20 miles from Mosul in northern Iraq. When King Ashurnasirpal II ascended to the throne (r. 883–859 B.C.E.), he relocated the royal court from Assur to Nimrud, establishing it as the capital of the Neo-Assyrian Empire and rebuilding it completely, with lavish temples and a palace funded by his successful conquests. Nimrud continued to be an important city after the royal court moved to Nineveh in 705 B.C.E.

Between the late 10th and early sixth centuries B.C.E., the Neo-Assyrian Empire came to control large swaths of territories, becoming what some consider the world’s first true empire. At its peak, the empire’s boundaries included the entire modern Middle East along with much of modern Turkey, North Africa and Central Asia. The Neo-Assyrian kings amassed booty and tribute from all over the Near East, leaving us with extensive records.

In 1845, Austen Henry Layard became the first person to excavate Nimrud. He discovered Ashurnasirpal II’s royal palace guarded by colossal statues of human-headed bulls (lamassus) and decorated with elaborate wall reliefs depicting the ruler triumphant in hunting and conquest. As described in “Mad to See the Monuments” by Steven W. Holloway and “Past Perfect: Excavating Nimrud,” Victorian England went wild over the antiquities that came out of Nimrud and other sites Layard excavated in Iraq. Many of the reliefs and statues from Ashurnasirpal II’s North-West Palace are now on display in the British Museum and elsewhere in the world. The palace itself, however, has been demolished by ISIS militants.

Layard thought that the ruin called Nimrud was the Biblical Nineveh, where Jonah preached and which the prophet Nahum denounced. Layard, however, was incorrect. As we learn in “Uncovering Nineveh” by Deborah A. Thomas, Biblical Nineveh was later identified with a nearby ruin called Kuyunjik. In 1850, Henry Rawlinson interpreted an inscription on one of the buildings at Nimrud and identified the city as Biblical Calah (Genesis 10:11–12).

Explore some of the fascinating small finds that have come to light at Nimrud—intricately carved ivory objects, ivory and wooden writing boards and an ivory figurine that may depict a Nubian tribute-bearer—in “Well-Hidden Ivories Surface at Nimrud” by Alan Millard, “Recovered!” by Dorit Symington and “Worldwide: Nimrud, Iraq.”

A large black obelisk found at Nimrud shows an Israelite king identified as Jehu bringing tribute to Shalmaneser III. Even today, this is one of the few known references to an Israelite king outside of the Bible. In “Did King Jehu Kill His Own Family?” Tammi Schneider describes an interpretation that reconciles the Biblical text with an inscription on the famous Assyrian Black Obelisk. Assyrian art and inscriptions also corroborate the Assyrian incursions detailed in 2 Kings. As discussed in “Israelites in Exile” by K. Lawson Younger, Jr., reliefs and inscriptions from Nimrud record the ambitions of the Assyrian kings and the conquest and deportation of the northern kingdom of Israel in 722 B.C.E.

Like any ancient site, Nimrud reveals a common human heritage: the human longing for power, wealth, beauty, learning and the divine, its dazzling accomplishments and its spectacular failures. Through global efforts to document and preserve the antiquities from Nimrud and other Assyrian cities, the once-mighty Assyrian Empire will be remembered for centuries to come.