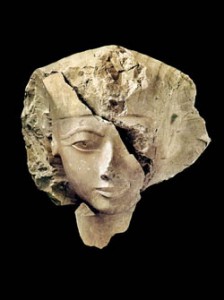 Throughout its long history, the land of ancient Canaan and Israel was often inseparably linked with the customs, traditions, and military ambitions of its powerful neighbor to the west, Egypt. These articles highlight not only the grandeur and might of pharaonic Egypt, but also the varied ways in which Egyptian records and monuments allow us to better understand the peoples and personalities of the Biblical lands. The articles below were hand-selected by Biblical Archaeology Society editors especially for members of the BAS Library.

What does it tell us about Egypt’s first kings?
Archaeology Odyssey, Sep/Oct 2004
by David O’Connor

When a Woman Ruled Egypt

“Look on My Works”

The many faces of Ramesses the Great
Archaeology Odyssey, Sep/Oct 2003
by Jack Meinhardt

Pharaoh’s Man, ‘Abdiel: The Vizier with a Semitic Name

The Trowel vs. the Text

Carved in stone some 5,000 years ago, it’s one of the earliest and most beautiful works of Egyptian art. It shows, among other things, a man named Narmer smiting a foe and marching in a victory procession that leads toward his decapitated enemies. Its imagery is so powerful that it became a symbol of the Egyptian pharaonic dynasties—though, mysteriously, it was carved before there were any dynasties. So what is the Narmer Palette, and just what does it mean? David O’Connor sheds light on this in Narmer’s Enigmatic Palette.

Queen Hatshepsut ruled for more than two decades during the early part of the New Kingdom, when Egypt was the most powerful land in the eastern Mediterranean. Scholars are still debating whether she was an ambitious schemer who stole the throne or a brave ruler who was forced to act swiftly in taking the reins of power in order to prevent some disaster. Find out in “When a Woman Ruled Egypt.”

He was the King of Kings, from a humble family in the Nile Delta. He was the powerful Pharaoh of Exodus, unable to keep his Israelite slaves from escaping. As part of his legacy, he sired scores of children—then outlived them. In the end, he was a red-haired nonagenarian with tooth abscesses and severe arthritis who left images of himself, in the guise of gods, throughout the land. All this, and more, was Ramesses the Great—detailed in “‘Look on My Works’: The many faces of Ramesses the Great” by Jack Meinhardt.

Two decades ago, Egyptologist Alain Zivie excavated a tomb in Saqqara, Egypt, belonging to ‘Abdiel, a high-ranking official with a Semitic name. ‘Abdiel had served as a vizier to two pharaohs: Amenhotep III and his son, Akhenaten. Could this vizier from ancient Egypt illuminate the story of Joseph in the Bible? Join Dr. Zivie in “Pharaoh’s Man, ‘Abdiel: The Vizier with a Semitic Name” as he explores ‘Abdiel’s tomb and identity.

The 14th-century B.C.E. archive of Egyptian cuneiform tablets known as the Amarna letters paints a picture of a thriving network of Canaanite city-states that had sophisticated diplomatic relations with Egypt in the Late Bronze Age. The problem is that archaeological excavations at the Canaanite sites reveal only meager remains from this period. In “The Trowel vs. the Text,” Nadav Na’aman explains how the historical record and the archaeological record must complement each other to create a fully balanced picture of ancient history. His insights have particular relevance to the history of Jerusalem.

More than 3,800 years ago, illiterate Canaanite laborers working in the turquoise mines of Sinai were responsible for one of the most significant inventions in human history: the alphabet. In “How the Alphabet Was Born from Hieroglyphs,” Egyptologist Orly Goldwasser explores the simple but ingenious ideas that led these miners under hieroglyphic inspiration to create the first-ever alphabetic script.

The enigmatic Papyrus Amherst 63 was likely created by the descendants of the Aramean and Judean soldiers who in the fifth century B.C.E. had been stationed at the southern Egyptian border. Recorded in a cursive script derived from Egyptian hieroglyphs, the Aramaic texts of the Amherst papyrus keep challenging what we know about Aramean religion and the history of the Hebrew Bible. Learn about the three Israelite psalms that might be found in Amherst 63 in “Egyptian Papyrus Sheds New Light on Jewish History” by Karel van der Toorn.