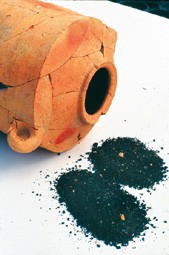 Astounding stories of kings, battles and palaces can captivate our imaginations when we picture the Biblical world. While grand, these stories don’t teach us much about actual lives that most people lived in the Biblical world. Archaeology provides insights into daily life—and what could be more important on a daily level than food? BAS editors have arranged a special collection of articles from the Biblical Archaeology Review and Bible Review exploring farming and dining in the Biblical world. What do organic remains teach us about ancient agriculture? Why do so many decisive moments in the New Testament occur around the dinner table? And why does Jewish law prevent mixing milk and meat? Find out in this BAS Library Special Collection.

How Ancient Man First Utilized the Rivers in the Desert

Why Milk and Meat Don’t Mix

Should Cheeseburgers Be Kosher?

Agricultural terraces once served as a network of farms surrounding and supplying ancient Jerusalem. In the article “Ancient Jerusalem’s Rural Food Basket,” Archaeologists Gershon Edelstein and Shimon Gibson describe the considerable planning and engineering that went into creating these terraced farms, some of which have been in use for millennia. Iron Age, Second Temple period and Byzantine farms not only teach us about ancient diets, farming techniques and rural construction; the terrace agriculture matches descriptions found in the Bible.

Nebuchadrezzar’s destruction of Ashkelon preserved a wealth of archaeological materials, including carbonized seeds and fruits. In “Weeds & Seeds,” archaeobotanists Ehud Weiss and Mordechai E. Kislev describe what we can learn about Philistine food production from tiny samples. The local economy could not have relied on the fields around the city, so regular, long-distance trade in crop plants, such as cereals, must have occurred. Archaeobotany reveals the Philistine city’s economy and food supply on the eve of its fiery destruction.

More than 50 years ago, American archaeologist Nelson Glueck asked: Was the ancient Negev “a kind of Paradise Lost situated between the granaries of plenty known as Egypt and the country ‘flowing with milk and honey’ called Canaan?” More recent surveys revealed the development of the region’s food economy. In “How Ancient Man First Utilized the Rivers in the Desert,” Thomas E. Levy describes northern Negev advances such as floodwater farming that allowed for the development of the region’s agriculture, pastoralism and village systems.

Archaeology tells us a great deal about farming and economics, but what do we know about eating? It’s no coincidence that Jesus’ first miracle took place at a wedding feast, and that he gave his last instructions to his followers over dinner. Meals were the place for social bonding in the Greco-Roman world. In “Dinner with Jesus and Paul,” Dennis E. Smith describes traditional Greek, Roman and Christian dining practices that explain why Jesus taught, performed miracles and sparked controversy while dining throughout the Gospels, and why Paul’s church gatherings from Antioch to Rome took place at meal time.

The Rabbinic injunction against mixing milk and meat is a core law of kashrut, an elaboration of the Bible’s injunction against “boiling a kid in its mother’s milk.” But what distasteful behavior was this dietary ban originally meant to curb? In “Why Milk and Meat Don’t Mix,” Gloria London suggests that the probation may have started to prevent meat from spoiling, based on her study of traditional Cypriot potters. However, in “Should Cheeseburgers Be Kosher,” Jack M. Sasson uses early translations and scholarship to suggest that we can find the origins of the often-debated law in the text itself. The original Biblical text, which was recorded without vowels, may have prohibited cooking in fat, rather than milk.

Put your knowledge to the test with our recipes from the BAR test kitchen! Whether it's pastries from Syria, or custard from Rome, these recipes have been researched and tested by our dedicated BAS gourmands, and are ready to be shared, from our kitchen to yours.