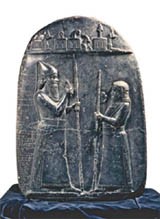 Ancient Israel did not develop in isolation in the ancient Near East. Much of Israelite history took place within and alongside the great Mesopotamian empires that left behind an abundant archaeological and textual record. The Hebrew Bible characterizes Assyrians, Babylonians and Persians in various lights ranging from evil conquerors to messianic saviors.

How do Biblical archaeologists approach Assyriology and the history of the broader Near East? BAS editors have arranged a special collection of articles highlighting different means of understanding the Mesopotamians and their relationship with the Israelites.

The relationship between Israel and Assyria was not a peaceful one. The Assyrian conquest of the Northern Kingdom of Israel led to a large-scale deportation of the Israelite people. In “Israelites in Exile,” K. Lawson Younger, Jr. explores the various roles played by deported Israelites within Assyrian society. The vast majority of them were treated terribly. However, some served in the Assyrian military, and others were assimilated into the larger community.

2 Kings details the Assyrian military campaigns against the Judahites. In “Jerusalem Under Siege,” William H. Shea asks whether there were one or two series of attacks by the Assyrians on Lachish, Jerusalem, and other Judahite cities in the period between 701 BCE and 688 BCE. After the initial siege came without warning, Hezekiah fortified both the city of Jerusalem and its water system and thus was able to hold off the Assyrians and protect the water supply.

Mesopotamia can be seen as a comparative example for development in the ancient Near East. In “Nebuchadnezzar and Solomon,” Bill T. Arnold illuminates the parallels between two great kings that both took on major building programs. For both monarchs, the period of greatest military and national strength spawned an age of literary and architectural accomplishment.

Despite the historical bloodshed, not all depictions of the great Near Eastern empires were negative. In “Cyrus the Messiah,” Lisbeth S. Fried examines why this non-Jewish king of Persia was referred to as “messiah,” or “anointed one.” He is the only foreigner in the Bible to be thus identified; the prophet known as Second Isaiah bestows this honor.

These four articles paint a diverse picture of how the ancient Israelites interacted with the surrounding and attacking empires of this period. Analysis of the textual and archaeological record of neighboring cultures reveals a complex relationship between the Biblical and Mesopotamian worlds, one that can be taken past the Biblical text to expose cultural parallels, military discord and shared history.