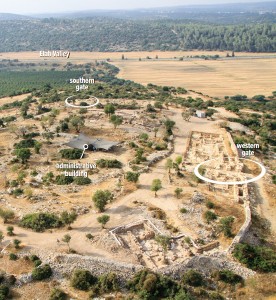 Some of the most interesting archaeology of the Biblical world has been happening at Khirbet Qeiyafa over the past decade. Thanks to the excavations of this Judahite city, our understanding of the Kingdom of Israel in the tenth century B.C.E. has deepened.

In this BAS Library special collection of Biblical Archaeology Review articles, read about the exciting finds from Khirbet Qeiyafa and their implications. Yosef Garfinkel and other authors share the discoveries, with analysis of what they tell us about the region during the time of King David.

An Ending and a Beginning

The Puzzling Doorways of Solomon’s Temple

The Face of Yahweh?

The first season at Khirbet Qeiyafa, in the summer of 2008, was a great success, finding an ancient city from Iron Age IIa, at the time of the Kingdom of David. They also found what may have been the first inscription in Hebrew. Newly Discovered: A Fortified City from King David’s Time covers some of the important questions, and answers, the initial excavation presented.

Why leave Qeiyafa and head to Lachish? In An Ending and a Beginning, the authors review the enriched state of knowledge about the 10th century B.C.E. Kingdom of Israel from the first four years of excavations at Khirbet Qeiyafa. They also discuss how, by excavating at Lachish--after Jerusalem, probably the most important city in the Kingdom of Judah at that time--they anticipated learning more.

Excavations at Khirbet Qeiyafa have uncovered a second city gate from the 10th century B.C.E., the time of King David’s reign. In Rejected! Qeiyafa’s Unlikely Second Gate, Yosef Garfinkel, Saar Ganor, and Joseph Baruch Silver examine the implications. No other site from this period has more than one gate. What do Qeiyafa’s two city gates tell us about the Kingdom of Judah in David’s time?

In the book review, Review: King David’s Stronghold at Khirbet Qeiyafa? Aren M. Maeir celebrates the discoveries described engagingly by authors, Yosef Garfinkel, Saar Ganor, and Michael G. Hasel, in their book, In the Footsteps of King David: Revelations from an Ancient Biblical City. He also raises some concerns that some of their claims exceed what is known from the evidence, and are contested by other scholars.

Archaeologists have uncovered male figurines from sites in ancient Judah. Could these represent the Israelite God, Yahweh? In The Face of Yahweh?, Yosef Garfinkel shares a discovery from Khirbet Qeiyafa, and its implications for understanding how worship developed in the Israel and Judahite kingdoms 3,000 years ago.