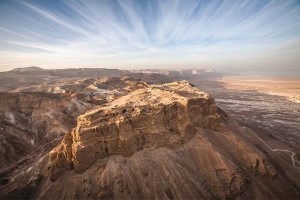 Masada—for many, the name evokes the image of a cliff rising dramatically above an austere desert landscape. The name is famously associated with the Masada siege, the final stand between the Jewish rebels and the relentless Roman army at the end of the First Jewish Revolt in 73 C.E. Trapped in the desert fortress-palace Herod built in the previous century, the rebels chose—as Jewish historian Josephus tells us—to commit mass suicide rather than be captured and enslaved by the Romans. Discover what archaeology can tell us about Herod’s fortress-palace, the Roman siege, and the rebels’ final moments in a BAS Library special collection of Biblical Archaeology Review articles selected specially for BAS Library members.

The Last Days and Hours at Masada

Masada: Arms and the Man

The Masada Siege—From the Roman Viewpoint

It’s a Natural: Masada Ramp Was Not a Roman Engineering Miracle

Yigael Yadin’s famous excavations of Herod’s Masada desert fortress in the 1960s brought the final chapter of the First Jewish Revolt vividly to life. What was uncovered on this long abandoned mountaintop? In “The Last Days and Hours at Masada,” Ehud Netzer reviews Yadin’s finds, from Herod’s two palaces to the casemate wall that Josephus reports the Romans set ablaze to gain entry into the fortress. Discover how well Josephus’s dramatic—and dramatized—account of the siege of Masada holds up to the archaeological evidence.

The large and diverse array of arms and armor discovered all over Masada offers a unique perspective to the Roman siege. Yigael Yadin believed that a cache of arrowheads found in two palace rooms, for example, were among the supplies the Jewish rebels set afire before committing mass suicide. Was he right? In “Masada: Arms and the Man,” Jodi Magness’s investigation into the context of these arrowheads and other weapons at Masada sheds light on the Roman and Jewish warfare tactics in the final chapter of the First Jewish Revolt.

In the siege Masada, the Romans waged both literal and psychological warfare to impress upon the Jewish rebels that their situation was hopeless. In “The Masada Siege—From the Roman Viewpoint,” Gwyn Davies examines the archaeological remains of the Roman siege works—the most complete surviving siege system of the ancient world.

Scholars have long assumed that the ramp built by the Romans to breach the rebel stronghold at Masada required a huge effort in men and material. The Masada desert fortress sat atop a lofty mesa with cliffs soaring 300 to 1,000 feet high. But a study of the geology of the region, as described in “It’s a Natural: Masada Ramp Was Not a Roman Engineering Miracle” by Dan Gill, reveals that the Romans may not have had to do much at all.

Today, Masada is a well-visited UNESCO World Heritage site that had undergone several excavation seasons since the 1960s—and it’s now being excavated once again. In “Masada Shall Never Fail (to Surprise) Again,” dig directors Guy Stiebel and Boaz Gross give readers an inside look at some of the expedition’s preliminary findings, as excavations shed new light on the dramatic site.