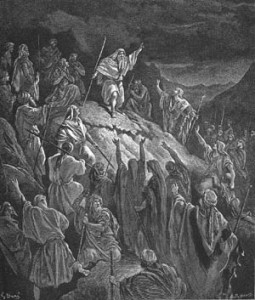 Who were the Maccabees? More than Hanukkah heroes, the Maccabees were a family of Jewish priests who overthrew Seleucid rule and established an independent Jewish dynasty in the Holy Land during the second and first centuries BCE. According to the books of 1 Maccabees and 2 Maccabees, zeal for the Jewish religion drove this revolt, and the familiar holiday Hanukkah celebrates the purification of the Jerusalem Temple under their leadership. In this collection of Biblical Archaeology Review and Bible History Daily articles, learn more about the Maccabees.

“Modi’in: Hometown of the Maccabees”

“The Hasmonean Kings: Jewish or Hellenistic?”

“Hanukkah, 1 and 2 Maccabees, and the Apocrypha”

“Who Was He? Rare DSS Text Mentions King Jonathan”

“Under the Influence: Hellenism in Ancient Jewish Life”

“The Genesis of Judaism”

The Maccabees—Mattathias and his five sons, John, Simon, Judas, Eleazar, and Jonathan—certainly left their mark on history. They founded the Hasmonean dynasty and ruled Judea for more than a century. Modi’in is famous as the hometown of the Maccabees. Archaeologists Shlomit Weksler-Bdolah and Alexander Onn led excavations at the site of Umm el-‘Umdan, which they connect to ancient Modi’in. In “Modi’in: Hometown of the Maccabees,” they describe what their excavations reveal about the Jewish village that the Maccabees called home.

At the height of their power, the Maccabees ruled over a substantial territory—from Judea to Galilee. Their palaces, excavated in Jericho, reveal a great deal about how they lived. Explore what the palace architecture and pottery tell us about the delicate balance the Hasmoneans tried to strike when projecting the power, wealth, and authority of their independent state to their Jewish subjects and foreign dignitaries—in Eyal Regev’s article “The Hasmonean Kings: Jewish or Hellenistic?”

Antiochus IV Epiphanes ruled over the Seleucid Empire, including Judea, in the second century BCE. He pushed Hellenistic culture and pagan worship on his subjects. Not only did he ban Sabbath observance, but he also desecrated the Temple. This triggered the Maccabean Revolt. Learn more about this nefarious character in John Gregory Drummond’s article “Antiochus Epiphanes—The Bible’s Most Notoriously Forgotten Villain.”

Antiochus IV Epiphanes profaned the Jerusalem Temple by setting up idols within it and offering a pig on its altar. The Maccabees recaptured Jerusalem and rededicated the Temple to the Jewish God. Hanukkah celebrates this rededication, including the cruse of oil that miraculously lasted for eight days. Explore the earliest accounts of this holiday in Jonathan Klawans’s article “Hanukkah, 1 and 2 Maccabees, and the Apocrypha.”

A remarkable Dead Sea Scroll fragment mentions “King Jonathan.” Scholars Esther Eshel, Hanan Eshel, and Ada Yardeni identify this figure with the Hasmonean king Alexander Janneus, who ruled from 103 to 76 BCE. Explore the evidence and learn more about Alexander Janneus, the great-grandson of Mattathias, in “Who Was He? Rare DSS Text Mentions King Jonathan.”

From the time of Alexander the Great to the end of the Roman Empire, Greek culture permeated much of the ancient world. Judea was no exception. Hellenism brought with it new artistic styles, architectural forms, and literary genres that helped give new expression to traditional forms of Jewish identity and culture. The first Maccabees famously rejected Hellenism, but later rulers embraced it. See the varied Jewish responses to Hellenism in Martin Goodman’s article “Under the Influence: Hellenism in Ancient Jewish Life.”

The Torah details numerous laws, covering everything from image prohibitions to dietary restrictions and bathing prescriptions. In his article, “The Genesis of Judaism,” Yonatan Adler explores when Judeans began to observe these laws. Textual and archaeological sources point to a particular time when Torah observance became widespread. The Maccabees played a significant role in this.