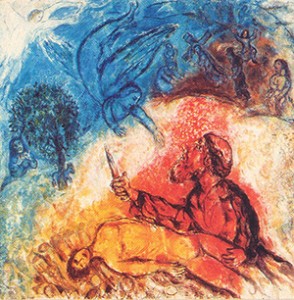 Before there was a Promised Land, before there was a people known as Israel, there was a man named Abraham, who was called by God to leave his home and his country and head for an unknown place. Turmoil and tragedy, deception and violence, passion and desire, love and reconciliation—they are all found in the patriarchal narratives from Genesis. But Abraham and his family persevered and survived to found a great nation. In this special collection of Bible Review articles—based on the book Abraham & Family (Biblical Archaeology Society, 2000)—Biblical scholars provide different avenues to understanding the Genesis account of the patriarch Abraham.

The Binding or Sacrifice of Isaac

Parallel Lives: The Trials and Traumas of Isaac and Ishmael

God’s promise to give “all the land of Canaan” to Abraham’s descendants fills the aged patriarch with hope—and despair. He has no heir! The tension created by God’s pledge and Abraham’s lack of an heir drives the story related in Genesis 11–25. But when Abraham attempts to ease his situation by finding himself an inheritor, one obstacle after another thwarts his plans; the tension merely increases as God rejects Abraham’s choices. Only through faith in God, Abraham ultimately perceives, will the covenant be fulfilled, writes Larry Helyer in “Abraham’s Eight Crises—The Bumpy Road to Fulfilling God’s Promise of an Heir.”

The story of the offering of Isaac is one of the most powerful narratives in the Hebrew Bible. But each tradition has understood and used the story differently and for varying purposes. Jews and Christians even have their own terms to describe the near-sacrifice. In “The Binding or Sacrifice of Isaac—How Jews and Christians See Differently,” Robin Jensen explores the meaning that Jews and Christians find in Abraham’s obedience to God.

Although the Bible emphasizes the differences between Isaac and Ishmael, the half brothers suffer at least one strikingly similar life (or should we say near-death) experience. Do they have more in common than we thought? Is the Bible trying to tell us something with this little-noticed parallel? Curt Leviant examines the similarity in “Parallel Lives: The Trials and Traumas of Isaac and Ishmael.”

Innocent or guilty? What verdict does modern Bible scholarship pronounce on Jacob, who tricked his older brother Esau out of an inheritance? Was Jacob guilty? Or was the blame his mother Rebekah’s? In a “The Patriarch Jacob—An ‘Innocent Man,’” Carl Evans looks at the narrative from Jacob’s perspective and points a finger at Esau for his cavalier attitude toward his birthright and at Rebekah for her insistence that Jacob play his part in a scene that she directs.

Though their story is confined to portions of a mere seven chapters in Genesis, there are few Biblical characters more vivid than Leah and Rachel. What reader of the Bible can forget the substitution of Leah for Rachel on Jacob’s wedding night? Who is not familiar with the 12 sons borne by these two matriarchs and their concubines—the 12 sons who were to spawn the 12 tribes of Israel? Samuel Dresner examines each woman’s actions—especially their naming of their children—and mines the rich vein of rabbinic commentary and Christian art devoted to these two pivotal figures in “Rachel and Leah.”