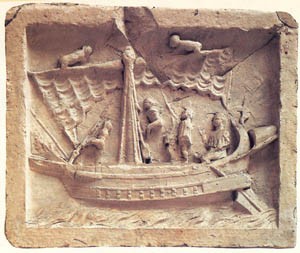 The apostle Paul traveled extensively throughout the Roman Empire to spread the teachings of Jesus. He spread the gospel for seven years across thousands of miles. What does archaeology tell us about the places he visited? Why did he stay in Corinth and Ephesus? Why did he take a treacherous route through Anatolia? What was travel like in Paul’s time? Why did Paul travel so far west–and did he also evangelize east in Arabia? BAS editors have compiled BAR and Bible Review articles that explore the cities, roads and peoples Paul encountered on his journey through the first-century Mediterranean.

On the Road and on the Sea with St. Paul: Travelling conditions in the first century

Corinth & Ephesus: Why did Paul spend half his journeys in these cities?

Corinth in Paul’s Time–What Can Archaeology Tell Us?

Why Paul Went West: The differences between the Jewish diasporas

What Was Paul Doing in “Arabia”?

Paul embarked on numerous sea voyages in a time when many people looked upon boat trips as almost certain death. He walked for days on roads roamed by villains and wild animals and ravaged by severe weather. In “On the Road and on the Sea with St. Paul,” Father Jerome Murphy-O’Connor describes in detail what life was like for a traveler in the first century A.D.

The apostle Paul took his preaching “on the road” for about seven years. For three of those years, he really moved around–spending only a month or two in each city, just long enough to establish a church. But for nearly four years he did not journey at all. He stayed in Corinth for approximately 18 months, and in Ephesus for more than two-and-a-half years. Did Paul change his outreach strategy? Dan P. Cole explains in “Corinth & Ephesus–Why Did Paul Spend Half His Journeys in These Cities?”

What were these cities like? About 50 A.D., when the apostle Paul arrived in Corinth on the isthmus connecting mainland Greece with the Peloponnese, he found a prosperous commercial city undergoing major remodeling projects b expert architects, builders and artisans. The elegant remains of Greek and Roman Corinth have been revealed by 100 years of careful excavations. In “Corinth in Paul’s Time–What Can Archaeology Tell Us?” Victor Paul Furnish displays the roads, shops, temples and artifacts that Paul saw and examines how they help us to understand better what Paul said and how he lived.

Paul’s first missionary journey took him from Cyprus into the heart of Anatolia. Why did Paul and Barnabas choose the treacherous path through Perga to Pisidian Antioch? In “Why Perga: Paul’s Perlious Passage Through Pisidia,” Mark R. Fairchild explores archaeological evidence for the likely presence of Jewish communities on the way.

The Jewish diaspora in Roman times and Late Antiquity was not just a scattering of people from the Land of Israel. In “Why Paul Went West,” Doron Mendels explores geographical, cultural, religious and language differences in two distinct diasporas–western and eastern–that help explain why Paul went west from Jerusalem.

Paul also mentions his journey to “Arabia”–probably today’s Jordan–only in passing in the New Testament. But why was he there? Jerome Murphy-O’Connor solves the mystery of “What Was Paul Doing in Arabia?”

Explore the BAS Library for more articles on the spread of Christianity.