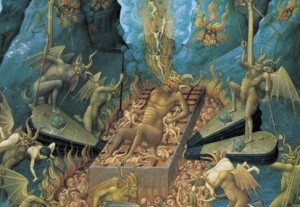 Examine who Satan really is and where he appears in the Hebrew Bible and the New Testament in a BAS Library special collection of Bible Review articles selected specially for BAS Library members.

From Seraph to Satan

Fallen Star: The Evolution of Lucifer

Who the Devil is Beelzebul?

The Harrowing of Hell

How should we picture the wily serpent of the Garden of Eden? He’s often regarded as the Devil in snake’s clothes. Yet, much to many people’s surprise, there is no Devil in Eden or, for that matter, anywhere in the Hebrew Bible. As Mary Joan Winn Leith explains in “From Seraph to Satan,” the serpent of Eden is just called nahash, or serpent, in the Hebrew Bible; he’s never referred to as the Devil or Satan.

How did the name Lucifer come to be equated with Satan? Ronald Youngblood clarifies in “Fallen Star” that the Hebrew term helel from Isaiah 14:12–15 was mistranslated by early church fathers as Lucifer. It really means “morning star” and is simply a metaphor for the Babylonian king described in the preceding and subsequent verses. Modern English translations almost all translate the text of Isaiah in this way and not as Lucifer.

The name Beelzebul appears three times in the Bible—in the books of Matthew, Mark, and Luke. Does it refer to Satan or the mighty Canaanite weather god Baal, or is it a mocking title for a Philistine deity? Bradley Stein traces the evolution of the name to answer the question in “Who the Devil is Beelzebul?”

Why do demons—so prominent in the greater Near Eastern world, in the New Testament and in the post-Biblical world of Judaism and Christianity—play such a minor role in the Hebrew Bible? As William H.C. Propp shows in “Exorcising Demons,” the Israelites made little room for other powers in the cosmos besides Yahweh: When people fell ill or suffered calamities, it was generally because of sin, not demons. And when harmful spirits do appear, they often do so as manifestations of God or as agents of his will.

Millions of Christians have recited the Apostles’ Creed as a statement of their faith. The creed’s brief account of Jesus’ life, death, and resurrection is borrowed directly from the Gospels—except for one line: “He descended into Hell”—in Latin, Descendit ad inferna. Just when did Jesus descend into Hell and what did he do there? How did his descent become an integral part of early church belief and art? Heidi J. Hornik and Mikeal C. Parsons answer these questions in “The Harrowing of Hell.”