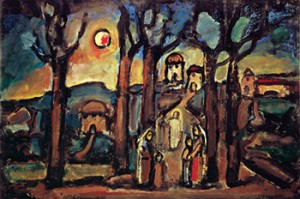 The birth of Jesus—from where he was born to which star led the magi to this “king of the Jews” to even how he was conceived—has long been analyzed by Biblical scholars. BAS editors have selected a special collection of Bible Review and Biblical Archaeology Review articles and an exciting video lecture to guide BAS Library members through this fascinating topic.

The Magi and the Star

Video: The Scandal of Jesus’ Birth

How Babies Were Made in Jesus’ Time

Where Was Jesus Born?
O Little Town of … Nazareth?

Where Was Jesus Born?
Bethlehem … Of Course

With their gold, frankincense, and myrrh for the “child who has been born king of the Jews” (Matthew 2:2), the three magi headed unfalteringly toward Bethlehem, following “the star that they had seen at its rising … until it stopped above the place where the child was” (Matthew 2:9). What was this wondrous star that hovered over Bethlehem at Jesus’ birth? In “The Magi and the Star,” Simo Parpola proposes that Babylonian astronomy may provide the key to identifying the star and dating Jesus’ birth.

The Gospels of Matthew and Luke narrate Jesus’ birth to a young virgin named Mary. Are these stories history or are they legend? The “Scandal of Jesus’ birth,” presented by the always-popular Mark Goodacre, is the first video lecture in the upcoming 10-lecture set “Who Was Jesus?”

Was Joseph involved in Jesus’ conception? If not, why is he referred to as Jesus’ father in Luke’s Gospel? Does this contradict the doctrine of the virgin birth, which is firmly established in Christian creeds? In “How Babies Were Made in Jesus’ Time,” Andrew Lincoln examines what early Christians thought about conception in the days of Jesus.

Where was Jesus born? You may have thought that the place of Jesus’ birth was an open-and-shut case: Where else but Bethlehem? But in the article “O Little Town of … Nazareth?” Steve Mason argues that it may be for good reason that Jesus is always called “Jesus of Nazareth” in the New Testament. Nonsense! answers the respondent Jerome Murphy-O’Connor in “Bethlehem … Of Course.” The early church had plenty of evidence that Jesus was born just where most people think he was, Murphy-O’Connor counters.