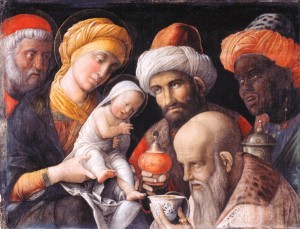 Bearing gifts for the infant Jesus, the three wise men from the east traversed afar to reach Bethlehem. What do we really know about the magi, who are so central to the traditional telling of the Christmas story? The Bible gives very little information about them; their story appears but once, in the Gospel of Matthew (2:1–12). Who were these three magi from the east, and why did they bring gold, frankincense, and myrrh? In a BAS Library special collection of BAR and Bible Review articles, learn about these mysterious gift-bearing visitors who followed a star to Bethlehem.

Witnessing the Divine: The Magi in Art and Literature

What Was the Star that Guided the Magi?

The Magi’s Gifts—Tribute or Treatment?

The legend of the magi has fired the imagination of Christians since the earliest times. In art, the adoration of the magi appeared earlier and far more frequently than any other scene of Jesus’ birth and infancy, including images of the babe in a manger. Robin Jensen explores in the article “Witnessing the Divine” the captivating tradition of the wise men who visit Jesus at his birth. In tracing the magi’s numerous appearances in art and literature, Jensen seeks to understand how various Christians have understood the theological message of the magi story.

The Gospel of Matthew tells the story of the brilliant, guiding star that led the magi from the east to Bethlehem, where they showered the infant Jesus with gifts. Hovering above the “place where the child was,” the star acted as a steady beacon for the travelers. But stars—even bright ones—don’t shine with such a precise beam. Although this star defies our modern, scientific ideas, it has much in common with the ancient understanding of another type of heavenly being that served as a guide. In “What Was the Star that Guided the Magi?” Dale C. Allison, Jr., examines how ancients would have interpreted and understood the star of Bethlehem.

The article “Lost Syriac Text Gives Magi’s View of the Christmas Story” describes the so-called Revelation of the Magi, an apocryphal account of the traditional Christmas story that purports to have been written by the magi themselves. The account is preserved in an eighth-century C.E. Syriac manuscript held in the Vatican Library, although scholar Brent Landau believes the earliest versions of the text may have been written as early as the mid-second century. Written in the first person, the text narrates the mystical origins of the magi, their miraculous encounter with the luminous star, and their equally miraculous journey to Bethlehem to worship the child.

Since the early days of Christianity, Biblical scholars and theologians have offered varying interpretations of the meaning and significance of the gold, frankincense, and myrrh that the magi presented to Jesus. Did the magi know of frankincense’s healing properties when they presented it to young Jesus? It’s possible, according to researchers who have been studying frankincense. Discover the medical uses of frankincense in “The Magi’s Gifts—Tribute or Treatment?”

In the ancient Near East, aromatic substances were thought to possess a variety of virtues: medicinal, purificatory, and apotropaic (evil-averting). In “Ancient Aromas—Good and Bad,” Kjeld Nielsen surveys the uses of aromatics in the ancient Near East and the myths and reasoning that lay behind them. The value of incense, in particular, is reflected in the nativity story in Matthew.