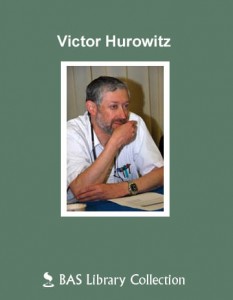 Recently deceased, Victor Hurowitz was a professor of Bible, archaeology and ancient Near Eastern studies at Ben-Gurion University of the Negev in Beer-Sheva, Israel, and will be remembered as a scholar who shaped our understanding of religion in the ancient Near East. In commemoration of his illustrious career, Biblical Archaeology Society editors have put together a collection of his most popular articles from BAR and Bible Review exclusively for BAS Library members.

Scroll down to read an obituary of Victor Hurowitz as it appears in the May/June 2013 issue of Biblical Archaeology Review.

The Genesis of Genesis

From Storm God to Abstract Being

It is always a special tragedy when a scholar dies relatively young. Victor Avigdor Hurowitz, a widely respected professor in the department of Bible, archaeology and ancient Near East at Ben-Gurion University, died unexpectedly in January at age 64 in the course of a hospital operation.

Hurowitz was an expert on cultic worship in the Hebrew Bible, especially in light of Mesopotamian materials. He analyzed the Biblical text in relationship to the literature and iconography of the ancient Near East and showed how the Bible should be seen in the larger context of the Mesopotamian world. His doctoral dissertation became a book and an extensive series of articles demonstrating that the Biblical account of the building of Solomon’s Temple in 1 Kings 5–9 was based on Mesopotamian literary models. Hurowitz showed that the Jewish Temple was seen both as God’s dwelling place and as a kind of Garden of Eden.

He was a special friend of BAR, both professionally and personally. He recently wrote about “Solomon’s Temple in Context” for BAR, as well as numerous articles for our sister magazine Bible Review. His views were recently mentioned in BAR editor Hershel Shanks’s First Person column.

At the time of his death Hurowitz was at the top of his game. He was on the editorial boards of Olam Ha-Tanakh, Mo‘ed, Bet Mikra and Shnaton: Annual for the Study of the Bible and the Ancient Near East. In 2012 he was selected as Israel’s representative of the International Association of Assyriology. His most recent research focused on Wisdom literature, and he published a two-volume Hebrew commentary on the Book of Proverbs in the Mikra LeYisra’el series just before becoming ill in December 2012. A festschrift was being prepared in Hurowitz’s honor when he died; it has not yet been published.

Born in Philadelphia, Hurowitz moved to Israel after completing his undergraduate degree in 1969. He earned his Ph.D. at the Hebrew University of Jerusalem in 1975 and taught at Ben-Gurion University of the Negev in Beer-Sheva until his death. He is survived by his wife, Ann, his son, Daniel, three sisters and one brother.

We thank Professor Shalom Paul, from whose eulogy of Professor Hurowitz many of the facts in this obituary have been taken.—Ed.