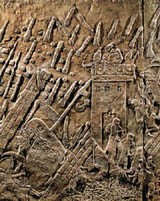 Biblical societies grew, flourished and fell within an ancient world torn by warfare and defined by power struggles. What do we know of warfare in the ancient world? BAS editors have arranged a special collection of articles on military perspectives in the Bible and Biblical world, ancient siege techniques and individual sites whose varied histories highlight the many sides of warfare.

It’s a Natural: Masada Ramp Was Not a Roman Engineering Miracle

Jezreel—Where Jezebel Was Thrown to the Dogs

Gamla: Portrait of a Rebellion

The Divine Warrior in His Tent

Ancient battles were generally waged not on the field of war but beneath a city’s walls. Paul Bentley Kern’s “Under Siege” teaches that ancient victory hinged on the ability to tunnel under, batter through or climb over those walls—or to last out a siege that could go on for year.

One of the most famous sieges in the Biblical world occurred at Masada. In “It’s a Natural: Masada Ramp Was Not a Roman Engineering Miracle,” Dan Gill shows that the ramp used by the Romans to breach the rebel stronghold at Masada did not, in fact, require a huge effort in men and material.

The reviled Phoenician princess Jezebel was thrown from her window at Jezreel. In “Jezreel—Where Jezebel Was Thrown to the Dogs,” David Ussishkin explores the cavalry headquarters at Jezreel and details the Omride fortifications, ancient chariotry and military remains. Danny Syon’s “Gamla: Portrait of a Rebellion” presents a very different archaeological picture of Gamla, another site remembered for its military history. Famous for its destruction in the First Jewish Revolt, Gamla now reveals its floruit before the fall.

One of the great modern horrors—the use of chemical and biological weapons of mass destruction—also terrified the ancient world. Adrienne Mayor’s “Ancient WMDs” shows how soldiers rigged booby traps with plague, created choking gases, tipped arrows in poison and lobbed pots filled with scorpions and snakes at their enemies. And the ancients, too, struggled with the question: Is this kind of warfare justifiable?

Michael M. Homan’s “The Divine Warrior in His Tent” paints ancient military camps in a very different light. The closest known parallel to the desert Tabernacle in the Hebrew Bible is a military camp erected by Pharaoh Ramesses II. Did this Egyptian headquarters serve as the model for the Tabernacle, in which the warrior god Yahweh directed the Israelite forces in battle?

Warfare defined many aspects of life in the ancient world, and these articles present a range strategic, architectural, symbolic and historical evidence of the Biblical past.