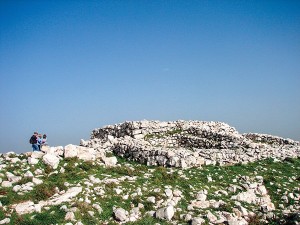 How did ancient Israel come to be? Did the early Israelites enter Canaan as the books of Joshua and Judges recount, or were they already there as part of the indigenous population? If they did enter Canaan, was it through conquest or peaceful settlement? The topic of Israel’s origins has been debated for several decades by archaeologists seeking to use material evidence to fill out the picture described by the Biblical account. In this special collection of articles handpicked by BAS editors, learn the central arguments in this debate and how archaeology is constantly contributing to our understanding of Biblical history.

Defining the Problems: Where We Are in the Debate

The Rise of Ancient Israel (BAS, 1992)
by Hershel Shanks

Inside, Outside: Where Did the Early Israelites Come From?

How Did Israel Become a People?

In “Defining the Problems: Where We Are in the Debate,” the introduction to the book The Rise of Ancient Israel, BAR editor Hershel Shanks outlines the basic questions and methodologies scholars are using in studying the emergence of ancient Israel in Canaan. Where did the people who became the nation of Israel come from—and when? By what process did they become a nation? Published by BAS, The Rise of Ancient Israel features chapters by William Dever, Baruch Halpern, and P. Kyle McCarter, Jr., and is available to read in full in the BAS Library.

Dozens of hill-country sites dated to the period that archaeologists call the Iron Age I (c. 1200–1000 B.C.E.) reflect the “Israelite settlement” in Canaan. Until the 1960s, scholars unanimously concluded that the newcomers came from the desert or desert fringes to the east—the question was whether the Israelites came by military conquest or by peaceful infiltration. In subsequent decades, a new theory emerged: that the early Israelites were indigenous to Canaan and were pastoralists who lived on the fringes of settled areas. In “Searching for Israelite Origins,” Israel Finkelstein examines and compares archaeological finds of the hill-country Iron I sites with those of the Late Bronze Age urban centers in an attempt to decipher the riddle of how the Israelites first settled in the hill country of Israel.

A proponent of the theory that the early Israelites came from the desert fringes, Adam Zertal presents finds from his archaeological survey of the hill country of Manasseh in “Israel Enters Canaan—Following the Pottery Trail.” Zertal uncovered substantial evidence that this area was the place where the Israelites first entered Canaan, perhaps from east of the Jordan River.

Foot-shaped sites have been found throughout the Jordan Valley, including an extraordinary cultic site on Mt. Ebal. In “Israelite Footprints,” Ralph K. Hawkins questions whether these foot-shaped enclosures were built by the Israelites as they entered the Promised Land—and whether the Mt. Ebal altar is the Israelite altar described in Joshua 8.

Hidden in the Jordan Valley, Khirbet el-Mastarah may represent an early Israelite settlement. As described by Ralph K. Hawkins and David Ben-Shlomo in “Khirbet el-Mastarah: An Early Israelite Settlement?” the site contains numerous enclosures and structures, which appear to have been used by a nomadic or semi-nomadic group at the beginning of the Iron Age (c. 1200 B.C.E.).

Most scholars agree that ancient Israel first appeared in the highlands of Canaan in about 1200 B.C.E. Here disparate bands of newly settled farmers and herders gradually coalesced into a single people united by their deity Yahweh. While some have argued that this new population originated in the coastal Canaanite cities, Anson F. Rainey in “Inside, Outside: Where Did the Early Israelites Come From?” offers compelling evidence that the earliest Israelites actually arose in the vast steppe lands east of the Jordan, just as the Bible recounts.

Avraham Faust explores the archaeological evidence for Israel’s ethnogenesis and the historical circumstances that led to the creation of the Israelite identity in “How Did Israel Become a People?” In a path-breaking analysis, he connects the “Israel” mentioned in the Merneptah Stele with the Iron Age settlements in Canaan’s highlands.