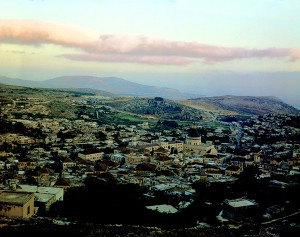 The man who would become the central figure in Christianity lived in Galilee in the first century C.E. In this BAS Library special collection of Biblical Archaeology Review articles, follow in Jesus’ footsteps and learn about the places he resided and visited during his life and ministry. Explore Nazareth, Bethsaida, Capernaum, Jerusalem, and more as you read about the archaeological sites that are bringing the Gospels to life with startling discoveries. Walk where Jesus walked!

Has Jesus’ Nazareth House Been Found?

A Pilgrimage to the Site of the Swine Miracle

Has the House Where Jesus Stayed in Capernaum Been Found?

Does the Holy Sepulchre Church Mark the Burial of Jesus?

A “courtyard house” from the time of Jesus was discovered in Nazareth. The house was later overbuilt with churches from the Byzantine and Crusader periods, suggesting its significance. Was this Jesus’ boyhood home? See what Ken Dark thinks in “Has Jesus’ Nazareth House Been Found?”

Bethsaida was one of the most important sites in Jesus’ Galilean ministry, but for 2,000 years no one knew just where it was. An international multidisciplinary dig team believes they have found the city—but not where you might expect. In “Bethsaida Rediscovered,” Rami Arav, Richard A. Freund, and John F. Shroder Jr. explore the site’s rich history from the time of King David to the New Testament period.

In “The Galilee Boat—2,000-Year-Old Hull Recovered Intact” Shelley Wachsmann details the discovery of an ancient boat from Jesus’ lifetime discovered in the Sea of Galilee. Jesus probably sailed the Sea of Galilee in a boat like this; so did Jews who fought the Romans in the battle of Magdala during the First Jewish Revolt.

In the Gospels, Jesus relieves a man tormented by demons by driving the demons into a herd of swine, which then stampeded down the hill and drowned in the Sea of Galilee. Discovered in 1970, and now excavated and restored, a monastery, basilica and chapel mark the location traditionally identified with this event. In “A Pilgrimage to the Site of the Swine Miracle,” Vassilios Tzaferis shows how this miracle site became an important destination for Christian pilgrims.

Excavations beneath an octagon-shaped building in Capernaum rumored to be the Apostle Peter’s house may have uncovered his actual home, according to James F. Strange and Hershel Shanks in the article “Has the House Where Jesus Stayed in Capernaum Been Found?”

In “Reconstructing Herod’s Temple Mount in Jerusalem,” a dazzling display of drawings by architectural artist Leen Ritmeyer brings to life the excavated remains of this holy site, where Jesus drove out the merchants and the money-changers from the Temple. Leen and co-author Kathleen Ritmeyer take you on a unique tour of the perimeter of the Temple Mount.

The Holy Sepulchre Church in Jerusalem is one of the most complex buildings in the world; renovated and repaired many times since its construction in the fourth century, it now incorporates Byzantine, Crusader and 19th-century Greek architecture. In “Does the Holy Sepulchre Church Mark the Burial of Jesus?” Dan Bahat assesses the evidence as to whether this famous pilgrimage site enshrines the burial site of Jesus.